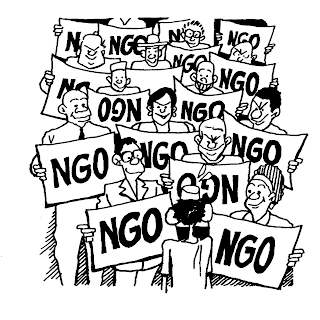 Bob Geldof has recently accused the BBC of "disingenuous posturing", distortion and a failure to provide credible evidence that Band Aid famine relief money had been used to arm rebels. He also requested that journalists "stop venturing palpably untrue statements dressed up as fact".But according to a new book by the Dutch writer and a veteran of war zones Linda Polman, In War Games: the Story of Aid and War in Modern Times, humanitarianism has become a massive industry that forms an unholy alliance with warmongers. She cites a damning catalogue of examples from Biafra to Darfur, and including the Ethiopian famine, in which humanitarian aid has helped prolong wars, or rewarded the perpetrators of ethnic cleansing and genocide rather than the victims. Colin Powell spelt it out: "Just as surely as our diplomats and military… NGOs (non-governmental organisations] are a force multiplier for us, an important part of our combat team." The US government avoided the issue of planning reconstruction in the Iraq War partly by lining up 80 NGOs who waited in the wings in Jordan prior to the invasion, where they were fully briefed by the defence department.

Back in 1980 there were about 40 INGOs (international non-government organisations) dealing with Cambodian refugees on the Thai border. A decade later, there were 250 operating during the Yugoslavian war. By 2004, there were 2,500 involved in Afghanistan.Recent years have also seen a large growth in smaller organisations, set up to negate the bureaucratic practices of the larger aid agencies. They can be run by just a handful of people – hence they've been named MONGOs (my own non-governmental organisations).
Polman maintains that when aid organisations don't actively discriminate, the most likely beneficiaries of war zone operations are the powerful, rather than the most needy. Not only is it the soldiers and militias who are able to levy taxes on aid, cargos and the movement of charity personnel, and to steal or divert funds, it is also these groups and the elites that have best learned the images and triggers that attract aid.She says that while aid agencies may recognise their failings they are unwilling to address them because of the pressures of competition. Humanitarianism is a multi-billion-dollar business and if one charity pulls out of an operation, be it from moral or strategic concerns, there are plenty of others who will fill their place and solicit their funding.

If there is understandable public suspicion of private contractors, like project-management firm Halliburton, who profit from war, she asks, why are private aid organisations treated differently? So how would she describe the humanitarian agencies that in her opinion enabled the continuation of the Hutus' genocidal attack on the Tutsis? "Perhaps war criminals," she muses. "because we don't see it that way. We see it as aid agencies being placed in circumstances in which they have no choice. I'm saying they do have a choice. They have a choice of not doing it." In July 1994 the Rwandan Patriotic Front, formed from Tutsi refugees based in Uganda, invaded Rwanda to put a stop to the genocide committed by Hutus on Tutsis. The Hutu militias, and many of the Hutu population, fled across the border to Goma in now the Democratic Republic of Congo.Twenty-five refugee camps were built around Goma, supported by 250 different aid organisations."On all the food rations distributed by aid organisations," Polman asserts, "the Hutu government, from its tourist hotels, levied a 'war tax' to pay its army, which enabled it to continue its campaign of extermination against the Tutsi enemy back in Rwanda."

Does she believe that the charity effort, including Band Aid, in response to what she maintains was a war-created famine in Ethiopia, made a bad situation worse? "It did nothing to stop the bad situation. It facilitated the regime."In 1984 prolonged drought coincided with civil war between the communist junta that governed Ethiopia and rebels in the northern provinces of Eritrea and Tigray. In an effort to win the battle, the government soldiers, writes Polman, "sealed off the northern region and went to work. They shot men and boys dead. They raped and mutilated women and girls. They flung infants on to fires alive. They set schools and clinics ablaze, slaughtered livestock, burned grain stores and poisoned water sources with human corpses and dead animals.And then they invited in the international media to witness the flood of famine refugees." Following Buerk's famous BBC report, an enormous fundraising campaign took place, including Band Aid, and thousands of aid workers and journalists flew in. "They were forced to change their dollars for local currency at rates favourable to the regime," Polman states, "and this alone helped to keep the Ethiopian war machine running. Food aid was used as bait to lure starving villagers into camps. They were held there awaiting deportation to the state farms in the south. A life of forced labour lay ahead."

She also describes in detail the relative luxury in which aid workers often live in the developing world and condemns the way that aid organisations draw local staff away from vital industries by paying way above the domestic rate.Polman depicts Kabul as a city divided between the poverty suffered by its inhabitants and the luxury enjoyed by foreign aid workers who "can be found at a nightclub called L'Atmosphere with cocktails and glasses of wine, or relaxing in the swimming pool near the bar".
More can be read at The Observer

Charity is seen as the milk of human kindness and in Cambodia in 1979,the reporter William Shawcross discovered the US La Leche League offering to send a Boeing 747 filled with lactating American mothers ready to suckle Khmer orphans.
Posted by ajohnstone at 3:03 am