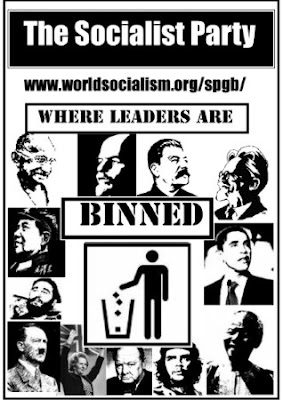 And so Brown , Cameron and Clegg engage in the first of their series of televised debates , all the other minor political parties , of course , excluded in this demonstration of media impartiality and fairness .

These three political party leaders claim to be working for the betterment of society. Each of them have their own idea on how to run capitalism, often stealing the ideas of their supposed political opposites and rivals . The reforms that they plan to implement must reflect economic reality. If they do not, they will not get re-elected - until the next party fails to reflect that reality. There is no way that capitalism can meet the needs of the majority, but all of the party leaders pretend it can if only they find the right plan. None of them have any really new ideas, only regurgitated reforms that have failed in the past. Voting for these parties is voting for capitalism, forever.

History shows us that no matter what these political leaders say, when elected they administer capitalism in the only way it can be administered - in the interests of the capitalist class. The amount of work involved in administering capitalist society means that it cannot be handled personally by the capitalist class themselves. They require other people to do that work for them, and thus require a political structure which enables them to enforce their general interest .The main means they have for ensuring this are the political parties and the election of some to become the administrators.

The SPGB are therefore hostile ( but not in the sense of committing violent acts against other parties or their members) to the ideas of those parties which support capitalism.The Socialist Party is, therefore, engaged in a war of ideas against all other parties. We have waged a war against all the political parties who have supported capitalism, including those that have done so while paying lip-service to socialism. Those other parties, no matter what they claim, are supporting the capitalist system and opposing the immediate establishment of socialism. The SPGB does not support the idea of reforming capitalism and therefore does not work for reforms. There are plenty of other organisations that do and yet the problems remain. By relegating socialism to the future, it is relegated to never.

Our position is that those people , whatever their intentions, are actually retarding the development of the organisations of the working class .Therefore we are in opposition to all other political parties, that these other parties are confusing what must be clear to working-class minds and clearly understood that there can be no significant material improvement in the workers' condition within the capitalist system .Since the majority of workers still think along capitalist lines, it is quite simple for the Brown , Cameron or Clegg and any other candidate to come along with plenty of promises – promises that they can in no way fulfil. Knowing how workers identify themselves with “our country”, these politicians can always hold out the threat of “our interests” being at stake – when all that is meant is that capitalist interests are at stake.We have been divided by clever mystifications and manipulations , by the colour of our skin, men against women, one religion against another, or on the basis of sexual preference, and it has been used well against us, making us compete against each other.

Perhaps the biggest myth which keeps people voting for political parties to run capitalism is that it is indeed possible to "run" capitalism. With no steering wheel, no brakes capitalism is nevertheless not short of prospective "drivers" who will do and say anything for a chance to sit up front in the "driving seat" . Governments govern by the myth of control. They persuade us that they can control market forces, but only until the next crisis, whereupon they blame world market forces or accuse foreigners for the crash .The SPGB couldn't "run" capitalism any better than the other parties and so hasn't tried to get elected to "run" capitalism .

You will find no “Great Men” in the S.P.G.B. Our objections to the existence of them is that it presupposes that some persons are accounted of little importance. We are an organisation of ordinary men and women , each is as unimportant and therefore each is as important as the other .We are not politicians, we do not propose to lead anyone to the "promised land", we do not advocate reforms or state controls, and we do not promise any utopias. We are workers, with a vision of workers creating a fundamentally different kind of society.

The SPGB is working for its own demise. In socialism there will be no need for any political leaders. Socialism will bring about a marked change in the form of decision-making— from representative democracy which is a weak form of democratic control, towards stronger expressions of democratic control, notably the use of mandated delegates and direct democracy aimed at encouraging popular participation and preventing the emergence of any potential new ruling class in the form of a decision-making elite.
Posted by ajohnstone at 5:15 am

Guys, as I've had to mention before, that's not how commas or periods work! Punctuation goes immediately after the last character of the sentence or clause, like this, not after a space!

Please don't think I'm nitpicking or being critical for the sake of being critical. You guys write good stuff and I'd like to be able to read it. Right now, the strange typographic conventions you employ make that hard!

i will try better in future. Promise.

Maybe when socialism is a global reality,we can communicate in esperanto or similiar,and do away with the pedantic idiocy of english gramer.