Out of five million Syrian refugees, only 130,000 have been welcomed by the world's wealthiest nations, according to Oxfam. The report added that ''a lack of political will and a rise in xenophobia have driven a backlash against refugees in many countries''.

''Around 130,000 Syrians spread across the rich countries of the world is a tiny number, particularly when contrasted with Lebanon, where one in five people is a refugee,'' Andy Baker, Oxfam's lead for the Syria crisis said. He continued ''After media coverage of drowned children provoked an outpouring of support in several countries, some rich governments heeded the calls of their citizens and their consciences and pledged to resettle vulnerable refugees. But too often in the last year, we've seen some leaders listen to a growing anti-refugee xenophobic backlash. Canada has resettled about 35,000 Syrians in the last year, while the UK has resettled a little over 3,000,'' he said. Just 18 per cent of its “fair share”.
The US has met only 10 per cent of its fair share. Spain has rejected a request from UNHCR to provide 500 visas for Syrian students from Jordan and Lebanon, despite overwhelming public support for resettlement.

In Russia, only two Syrians have received refugee status, despite the country being party to the 1951 refugee convention.

Jordan, Lebanon and Turkey host the vast majority of the nearly five million Syrians registered as refugees and along with Iraq and Egypt have faced the refugee crisis with limited financial support from others states 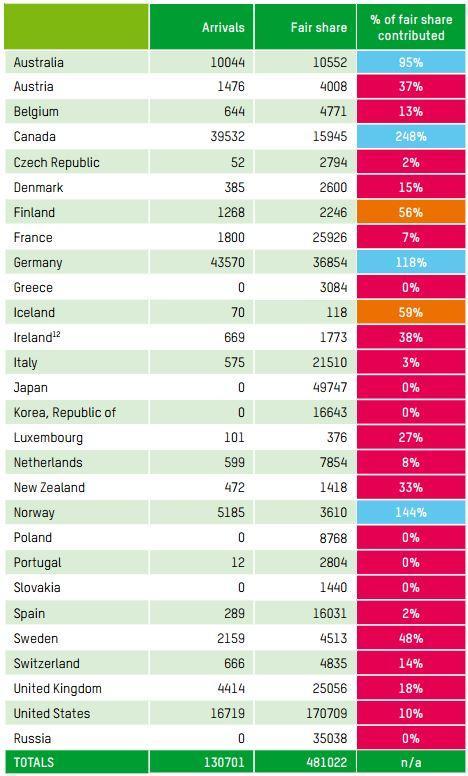 Posted by ajohnstone at 6:30 am