What is a Capitalist? 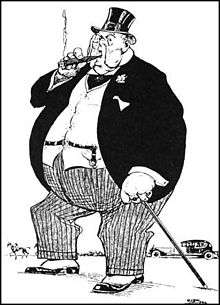 One of our pamphlets, 'The Case for Socialism', outlines a capitalist as follows:

“What makes a person a member of the Capitalist class is the fact that he has enough ownership in the form of bonds, stocks and shares to enable him to live without going to work for a wage”.

We suggest, that this traditional definition is inadequate for the following reasons:
1. It is not comprehensive enough as it does not include those members of the capitalist class who, as in Russia, do have to work and do not have large amounts of legal property titles.
2. It implies that capitalists can only own the means of production as individuals through legal property titles in their own names. But this has been proved historically to be only one form of capitalist ownership. In Russia this has largely taken another form: collective ownership by a group which controls the State and its industries. The common content of both is actual control of access to the means of production (plus preferential treatment in the distribution of the products), whether legally recognised or not. This fact is not reflected in the definition.
3. In emphasizing the high income of the capitalists it places their preferential treatment in the distribution of the products above their more basic position with regard to the production of wealth. In fact it makes no reference at all to their function in social production and does not allow for any distinction between the capitalist class and, for instance, a landowning aristocracy whose members also own sufficient wealth so as not to need to work for wages.

Any adequate definition of a capitalist must highlight their function in capitalist production (not production as such, mind you, so we are not looking for a technical function: we wouldn’t find one anyway since, from a technical point of view, production is run from top to bottom by the working class).

"Only as personified capital is the capitalist respectable. As such he shares with the miser the passion for wealth as wealth. But that which in the miser is mere idiosyncrasy, is, in the capitalists, the effect of the social mechanism, of which he is but one of the wheels (emphasis added, Capital, Vol.1, the section on the theory of abstinence).

(Marx went on, incidentally, to state quite clearly that he did not regard the aim of capitalist production as the consumption of the capitalist: "So far, therefore, as his actions are a mere function of capital — endowed as capital is, in his person, with consciousness and a will — his own private consumption is a robbery perpetuated on accumulation. .. ").

Engels, in the often-quoted passage from his ‘Socialism, Utopian and Scientific’ used the same formulation when he described the modern State as ''the ideal personi­fication of the total national capital". The implication being, though Engels does not specifically say so, that capital would be personified under State control of industry by those who controlled the State and the key investment decisions.

Not that every group that, for however short a period and however chosen, presides over the accumulation of capital can be described as a capitalist class; a ruling class has to have some preferential treatment in the distribution of pro­ducts. But what we can say is that any group which, through its control of the State, does "personify capital" over a longish period will tend to become a capitalist class, even if it doesn't get the legal right to draw a property income. This is essentially what happened in Russia after 1917.

To sum up, the rise of State capitalism —in Britain as well as Russia —has clearly exposed as inadequate the traditional definition of a Capitalist as a person who has sufficient personal wealth and legal property income not to need to work for wages. It is not so easy, however, to frame an alternative. We offer, for discussion, something along the following lines:

“A capitalist is a member of a stable group which over a longish period...directs the accumulation of capital/runs capitalism/ personifies capital.”

Haringey Branch, 1973 Annual Conference
Posted by ajohnstone at 6:00 am