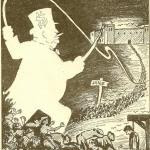 A useful article by Jon Kofas, a retired university Professor from Indiana University, that is worth re-posting extracts from.

The downward social mobility in America has been taking place in the last three decades and it is continuing.

On 31 July 2015, the US Federal Reserve released the second quarter labor report costs revealing that these were the lowest in 33 years. Despite massive rises in executive compensation and record corporate profits, politicians and media insist that wages are the problem in the economy. Where exactly is the empirical evidence to suggest that the American labor force on the whole, whether in the public or private sector, whether in the office or in the factory, whether in the commercial farm or the construction site is the cause for productivity inefficiency? If the business model is flawed, if management compensation exorbitant, if the child labor factory in Bangladesh makes the exact same garment five times cheaper under unhealthy and hazardous conditions, why is it the fault of the American worker and not the factory owner trying to squeeze out higher profits by exploiting children in the Third World?

According to the pro-business Organization for Economic Co-operation and Development (OECD), Germany has the world’s most productive labor force, while the US ranks third. Neither Germany nor the US have low wages compared with China and Vietnam, but they enjoy top world rankings from a pro-business international organization. Why then do politicians, the media, and well-paid pro-business consultants and academics-for-hire to businesses insist the US labor force is the problem to productivity?

The only reason that the US government, businesses, media and the IMF even raise the issue of worker inefficiency is to demand lower wages throughout the world, to crush labor unions, and to prevent new ones from emerging. If a 12-year girl in Bangladesh is making a few dollars a week, but her adult American counterpart is making $12 dollars an hour, is the conclusion that the American worker is “inefficient” or that the corporate employer is exploiting child labor in countries desperate for capital investment and no laws for children, safety, health and the environment?

Some sectors of the US economy including construction, agriculture, and manufacturing, employ foreign laborers, some of which are undocumented. This is also the case with domestic workers in the hotel and restaurant business where wages are low. Employers prefer to employ such workers because they are diligent, but also because they earn much lower wages than documented workers. For many decades employers have made the argument that employing Hispanic and other non-US-born workers is more efficient for them and they pass on the savings to the consumer. This is regardless of whether it is a commercial farm or a construction company. The trade unionists then turn against the undocumented workers, arguing the government is not cracking down on these people taking jobs away from American citizens. This is an old story of old immigrant workers making higher wages turning against the new ones earning much less. The media, government and businesses then argue that high paid workers losing their jobs simply do not have the “right skills” for the evolving job market, so it is their fault. If they just secure more education/training, they too could experience upward social mobility.

It is true that some people on welfare object to accepting work that pays lower than entitlement benefits including health care coverage. By contrast, Illegal immigrants have no choice and they take such jobs because they will live in groups and share expenses for everything. The 11 million undocumented workers in America are doing just about anything they can from hard construction work in all kinds of weather conditions to farm field work not because they enjoy it and they can make a decent living at it, but because the alternative is to return home or die here.

One would be surprised to discover that not just the US, but the rest of the advanced capitalist countries have a problem with unemployable college graduates, especially Europe and in fields of social sciences and humanities just like the US. Therefore, the problem is not that the US college student is so much different than her/his counterpart in the much of rest of the world, but that capitalism has a crisis of overproduction in college graduates as much as it does in every other commodity. The college student here and world-wide is nothing but a commodity subject to the market laws of supply and demand. Education is a reflection of the crisis of capitalism that cannot absorb the commodities it is producing under the existing system.

Part of the objection about entitlements is rooted in racism and xenophobia because of sterotypes that politicians and media have inculcated into the public. The assumption that the media and rightwing politicians reinforce is that recipients are black, illegal Hispanics, and lazy white single mothers in a trailer park. The stereotypes are deeply ingrained in the public mind for decades because the mainstream institutions project such an image to justify transferring resources to defense and corporations. The reality is that the capitalist system is based on structural unemployment because of the process of appropriation and overproduction on a global scale. Politicians, business people, the media and many academics from universities to consulting firms and think tanks agree that “full employment is between 4% and 5%” -this is the official rate not the unofficial that is much higher, and it does not take into account part-time work. There is general agreement that a segment of the “potential workforce” must be outside the “active labor force” on a chronic basis for the “health” – profitability - of the market economy to keep wages low.

According to a study in 2012, 35% of Americans were receiving some kind of “means-tested program” assistance amid the tail-end of the recession that started in 2008. The US federal budget in 2014 was $3.5 trillion, of which 34% went for national security and home security while Social Security, Veterans benefits, Medicare and health amounted to 52%. It is important to note that if we add research and development, NASA, and other defense-related spending not budgeted as such, the percentage rises. In 2011 for example the total costs for defense and related programs was $1.3 trillion, while “human security” programs that critics dismiss it as wasteful entitlements cost $2 trillion…many since the election of Reagan constantly question “human security” as a “waste of tax dollars”. Critics argue that such programs only encourage the poor and minorities to be lazy and parasitic, an argument that was actually floated in England during the era of Adam Smith at the end of the 18th century. Republicans and many Democrats find nothing wrong spending hundreds of billions on the parasitic defense industry because this sector is associated with patriotism, regardless of whether it adds more security along with a rising public debt. However, these same critics vehemently object to school lunches to feed the poor, assistance for the mentally ill, subsidized housing for people that would otherwise be living in parks, and subsidized health care for the lowest income groups unable to afford immense hospital and prescription costs. It is important to note that the entitlement program money goes right back to corporate America – health insurance and corporate-owned hospitals, supermarket and drug store chains, pharmaceutical companies, and other businesses.

Looking at the growing income gap in the US in the last four decades, there is no doubt that social justice is virtually eliminated from any political debate.
Posted by ajohnstone at 1:09 am