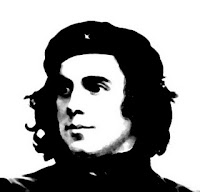 Rabbie Burns, poet; lyricist; freemason; anti-cleric; staunch republican; revolutionary democrat and advocate for the dispossessed; sympathiser with the American and French Revolutions and an inspiration to socialists. Acclaimed as the Peoples Poet. Except by those who argue that he was simply a hypocrite, aspiring to climb the social ladder, who had indicated his willingness to emigrate to Jamaica to become a slave over-seer on a sugar plantation ( yet he could also write The Slave's Lament about the homesickness of a man snatched from Senegal and put to work on a Virginia plantation), who received an appointment as an exciseman (albeit confessing he felt "like Judas Iscariot preaching the gospel."), becoming a member of the Royal Archers of Scotland, the monarch's ceremonial bodyguard.and then his enlistment with the Royal Dumfries Volunteers in a fit of patriotic fervour, penning the loyalist Does Haughty Gaul Invasion Threat? yet unable to forget the original principles behind France's revolution for Burns included the lines
"While we sing God save the King, We'll ne'er forget the People!"
Burns's funeral attended by 10,000 was conducted in a military ceremony. The Dumfries Volunteers acted as the pall bearers. His uniform, hat and sword crowned the coffin, the Cinque Port Cavalry band played Handel's Dead March from Saul and the Angusshire Fencibles fired three volleys over his grave.

He was the 18th century Bob Dylan and John Lennon rolled into one some say.

Why Should we idly waste our Prime? demonstrates Burns radical convictions and his belief in a better future for humanity

Then there is his defiance of conventionality in The Jolly Beggars: See the Smoking Bowl Before us

“See the smoking bowl before us,Mark our jovial, ragged ring!Round and round take up the Chorus,And in raptures let us sing A fig for those by law protected,Liberty's a glorious feast!Courts for Cowards were erected,Churches built to please the Priest.

Wi' plenty o' sic trees, I trow, The warld would live in peace, man. The sword would help to mak' a plough, The din o' war wad cease, man. Like brethren in a common cause, We'd on each other smile, man; And equal rights and equal laws Wad gladden every isle, man.

Wae worth the loon wha wadna eat Sic halesome, dainty cheer, man! I'd gie the shoon frae aff my feet, To taste the fruit o't here, man! Syne let us pray, Auld England may Sure plant this far-famed tree, man; And blythe we'll sing, and herald the day That gives us liberty, man.

Burns - 12 children in all by 4 different women - a womanizer and libertine or supporter of womens liberation? The title of the poem, "The Rights of Woman" immediately calls to mind Thomas Paine’s The Rights of Man. "Ca Ira" ("It Will Come") was the song of the French Revolution.

While Europe's eye is fixed on mighty thingsThe fate of empires and the fall of kingsWhile quacks of state must each produce his planAnd even children lisp the Rights Of ManAmid this mighty fuss just let me mentionThe Rights of Women merit some attention....

...But truce with kings, and truce with constitutions,With bloody armaments and revolutions;Let Majesty your first attention summon,Ah! ca ira! The Majesty Of Woman!

I murder hate by flood or field,Tho' glory's name may screen us;In wars at home I'll spend my blood-Life-giving wars of Venus.The deities that I adoreAre social Peace and Plenty;I'm better pleas'd to make one more,Than be the death of twenty.

Although he may have been tamed, incorporated into the tartan and tourist tack, where members of the establishment dine on haggis, neeps and tatties and drink whisky at ritualised Burns Nights, his universal subversive verses should not be forgotten. In 1850 at a New York gathering, the abolitionist and ex-slave Frederick Douglass said:
"Though I am not Scots and have a coloured skin I am proud to be among you, and that I learned from Robert Burns - 'A man's a man for a' that, then let us pray that come it may, as come it will for a' that, that man to man the world o'er shall brithers be for a' that.' "