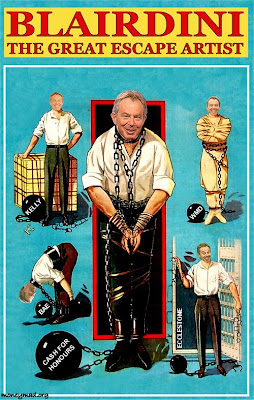 When he campaigned for the Labour leadership in 1994, Tony Blair said "We must tackle abuse of the tax system. For those who can employ the right accountants, the tax system is a haven of scams, perks, City deals and profits... We should not make our tax rules a playground for revenue avoiders and tax abusers who pay little or nothing while others pay more than their share."

Windrush Ventures is one of at least 12 companies and partnerships controlled by Mr Blair, who is thought to have channelled tens of millions of pounds through his various firms since leaving Downing Street in June 2007. Windrush Ventures, declared a turnover of £12m, up from £8.5m the year before. But Mr Blair's accounts claim that just over £1m of this is profit, the rest written off as "administrative expenses", with no further explanation given for some £7.74m of the total. With the corporate tax rate at 28 per cent, this left Mr Blair with a tax liability of only £315,000.

A City accountant from one of the "big four" auditing firms said: "It is mystifying why the administrative expenses should be so large. £8m worth of expenses would be very hard to explain – perhaps that's why they remain unexplained. Given that money is all offset against tax, I would think more explanation would be necessary."

Blair is on a £2.5m annual retainer with the American investment bank JP Morgan, a £500,000 annual salary advising the finance company Zurich, and earns at least £2m a year from his commercial consultancy Tony Blair Associates, which advises foreign governments including Kuwait and Kazakhstan. He also charges up to £100,000 per speech on the after-dinner circuit, on top of the pension he receives as a former prime minister.
http://www.independent.co.uk/news/uk/politics/blairs-company-paid-just-315000-tax-on-income-of-more-than-12m-6287001.html
Posted by ajohnstone at 3:00 am