The Sinking Houses of Parliament 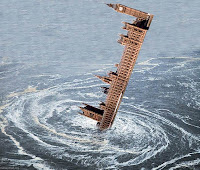 Serious cracks have already appeared, UK politicians are concerned, and a considerable amount of money must be thrown at the problem in order to shore it up and prevent it collapsing completely. No, not capitalism. The Houses of Parliament.

On 23 January, MPs on the House of Commons Commission, responsible for the upkeep of the Parliamentary estate, discussed a surveyor's report about the Palace of Westminster’s subsidence. The buildings are slowly descending below the Thames and the Clock Tower is leaning 18 inches off the vertical. It could cost at least £1billion to stabilise.

No one can be blamed for suspicions of funny business when Speaker of the House of Commons, John Bercow, suggested selling off the entire edifice to someone very wealthy, seeing how he avoided paying thousands of pounds in capital gains tax on the sale of two properties by declaring them as his main residence to the taxman, yet declared them as second homes for the purposes of expenses.

Anyway, two questions come to mind. First, who in their right mind would spend the estimated worth of the parliamentary complex (£500million) when they'd also then have to spend another billion pounds shoring it up? Secondly, why didn't its supposedly intelligent occupants take the precaution in the past of obtaining building insurance cover to avoid the present massive billion-pound repair bill? Even if Westminster Palace was considered 'high risk' by insurers, there are still specialist providers that could have handled it. If they can't even look after the premises in which they make decisions, is it any wonder they're collectively unable to manage the economy?

More importantly. Though the Houses of Parliament are subsiding, they certainly can't sink any lower than those within it, since the way parliament operates is acutely undemocratic. The UK population is permitted to choose between candidates of different political parties to supposedly "represent" them, but the system is rigged so that only mainstream capitalist parties get millions in state funds ("Short Money") and millions more in so-called private 'donations' (bungs) from millionaires and billionaires, or in the case of Labour, millions from trade unions (62 per cent of all Labour funding came from unions in 2010).

The broadcast and print media also play a role in maintaining the capitalist status quo by devoting 99.99 per cent of their political content to what Tories, Labour and Liberal Democrats are saying. They will excuse this bias on the basis that Tories, Labour and Liberal Democrats got the most votes at the last election, but this excuse conveniently ensures that in the run up to the next election, the electorate will hear nothing from the media about the anti-capitalist alternative, and so help perpetuate an endless game of musical chairs where Tweedledum and Tweedledee leaders take turns to govern for 5 years.

Worst of all, the "representation" that any pro-capitalist government claims to be performing on behalf of the electorate as a whole is a contemptible lie, since those elected to manage capitalism are compelled to operate within parameters set by the economic system for which they stand. Based upon minority ownership of the means of living, capitalism can only ever operate in the interests of that asset-owning capitalist minority — not the electorate as a whole. Theirs is a system driven by profit which severely restricts what can be achieved. And with outdated capitalism and the economy on the slide, it is frequently a case for those in so-called 'power' now of what must be undone, rather than done. Consequently, as long as the working class keep delegating to the capitalist class the right to govern, by empowering lookalike puppet politicians, they perpetuate their own exploitation.

A genuine democracy would be a participatory one, where all are involved in decision making that shapes their lives, and decisions made can actually be accomplished through having social collective ownership of the means of production and distribution. A participatory democracy would not mean everyone having to take part in numerous daily votes on numerous matters. Communities can select socialist delegates who act on their behalf. Within a genuine classless socialist society, such appointees would be equals — not leaders. They would not be constrained by any financial factors as primitive money would then be obsolete. All work and the provision of goods and services would be on the basis of "from each according to his ability, to each according to his need". These socialist delegates would be genuinely capable of benefiting those they act for — not like today's pro-capitalist MPs, who frequently give a sham promise to do their best, while knowing full well that the economic realities of capitalism mean there's nothing they can do.

Post capitalism, socialist delegates could even make use of Westminster Palace for their debates, although given its deplorable history, I'm really not sure they'd want to.

Posted by ajohnstone at 5:03 am

Email ThisBlogThis!Share to TwitterShare to FacebookShare to Pinterest
Labels: parliament

I want to see the beauty of the Houses of Parliament and have a photo as a souvenir.