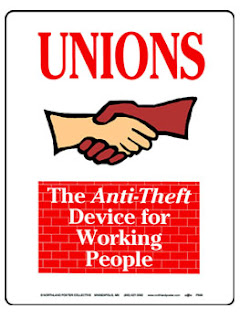 Unions in the US have hardly grown in more than 30 years. The private sector trade unions enroll but one out of every 14 workers. Meanwhile the strike has practically vanished from the American landscape - there were at least ten times more each year in the 1970s - and the negotiation of a new union contract, in both the public and private sectors, is considered a labor victory if the workers escape without too many givebacks.

But the fate of unionism is all about class power in American society and the ideologies that motivate those who either defend or defame these institutions. It is the unions -- in their sometimes plodding and prosaic fashion -- that have long ameliorated the stark disparities of wealth and income that an unfettered capitalism so naturally produces. By the far greater impact on the distribution of American wealth and power is the existence of a union movement and the prospect that it might one day grow again.

When they are strong, unions can limit the prerogatives of individual businessmen, government officials and the untamed workings of the labor market. Free-marketeers find all this intolerable, which is why governors like Scott Walker and New Jersey's Chris Christie so often seek to demonize the trade unions as corrupt and omnipotent. Fortunately, that rhetoric has found its limit, first in Ohio and now in Wisconsin where more than a million citizens put down their names endorsing the union idea.

In a stunning achievement for trade unionist opponents of the Wisconsin governor Scott Walker marshaled over a million signatures for a petition that has made it possible for Walker to lose his office in a recall election this spring. If so, that would be the first successful gubernatorial recall in Wisconsin history and only the third in that of the United States. Coming on the heels of the November referendum in Ohio, which overturned a similar Republican-sponsored law, it's clear that the American trade union movement is not yet dead.
Extracted from here
Posted by ajohnstone at 5:01 am

The SPGB is in favour of unions?! These are the same unions which have perpetuated the myth that measures such as nationalisation and a minimum wage are socialist ideals.
Unions, as much as anyone or anything else, have done much to maintain the left/right status quo, and to present a misleading and inaccurate articulation of socialism.

The Socialist Party are indeed in favour of the trade union movement, albeit critical supporters. You rightly point out the some faults of the unions and many other failings can be added such as financing the political parties of capitalism , the Democrats in the US and Labour in the UK.

But we acknowledge the absolute necessity of the unions under capitalism, and we support the active participation of workers within the trade union movement in their attempts to safeguard, and improve, their wage levels and working
conditions. At the same time we also fully realise the limitations of the the union. They serve the working class only on the economic
field whereas the emancipation of the working c1ass can only be achieved with political action through an international socialist movement. Socialists did not invented the class
struggle - it operates as an independent social phenomena because of the economic basis of a class divided society.

The ideal trade union, from a socialist point of view, would be one that recognised the irreconcilable conflict of interest between workers and employers, that had no leaders but was organised democratically and controlled by its members, that sought to organise all workers irrespective of nationality, colour, religious or political views, first by industry then into One Big Union, and which struggled not just for higher wages but also for the abolition of the wages system. The trouble is that this cannot become a full reality till large numbers of workers are socialists. In other words, you can’t have a union organised on entirely socialist principles without a socialist membership. However, it is clearly recognised that a union can be effective even without a socialist membership if it adheres to some at least of the features of the ideal socialist union outlined above, and will be the more effective the more of those principles it applies. This is why Socialist Party members in the existing unions have always insisted on recognition of the class struggle, democratic control by the membership and no affiliation to the Labour Party (our members refuse to pay the levy to the Labour Party). That is why our members join them and work with their fellow workers to get what can be got out of employers. Inside them, we advocate a class approach and internal democracy while arguing that the only lasting solution to the problems is socialism and the abolition of the wages system. The non-revolutionary position of the existing unions is a reflection, not the cause, of the non-revolutionary ideas of their members. However, when more and more workers come to be socialists the unions will be more and more transformed.