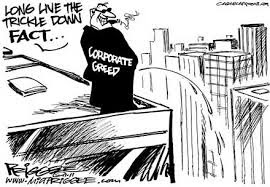 Inequality was a pre-existing condition for the US economy long before the coronavirus started its spread. The pandemic has merely exposed its “ugly face”.

It took developer Joe Farrell just one day to rent Sandcastle, his 15-bedroom mansion with sunken tennis courts in the wealthy enclave of The Hamptons, for $2m for the summer to “a textile tycoon and his family who were stuck in Manhattan and wanted to leave the city on a day’s notice.

Stock markets are setting new highs driven by soaring prices for the tech companies that enable those lucky enough to work from home. Apple is close to being valued at $2tn. The total wealth of US billionaires has soared $685bn since the middle of March to a combined $3.65tn.

Rock-bottom interest rates have triggered a home sales boom for some as those with the money reconsider their priorities in the work-from-home era. With nowhere to go, those Americans who can are saving at record rates.

“We are all in this together” may be the rallying cry for the pandemic but the truth is the poor, and particularly people of color, have been devastated by coronavirus and its attendant recession while the wealthy have weathered it and in some cases made huge gains.

Meanwhile roughly 30 million people are unemployed in the US, about 20% of the workforce. Almost 30 million Americans recently reported that they have not had enough to eat at some point in the previous seven days. The vast majority – about 26 million – had lower rates of educational attainment.


The recession has also further exposed the racial wealth gap. The job market ticked up again last month but 14.6% of Black and 12.9% of Latinx adults were unemployed in July, versus 9.2% of whites.
Only one in four Americans can work from home.
“It’s white-collar professionals who are able to work from home. In some ways, this is a sign that the economy is just officially split in two,” Glenn Kelman, chief executive of property company Redfin, told NPR.
For people able to work from home, “life has returned largely to normal”, said Peter Atwater, adjunct lecturer in the economics department at William & Mary. “In fact, the wealthiest today are even richer than they were before the outbreak.”
Economists often talk of V-shaped economic recoveries, a sharp drop and an equally sharp bounce back. Sometimes the economy drags along the bottom before bouncing back – a U-shaped recovery. Now there is talk of a “K-shaped” recovery. A fall followed by a split where the well off and well educated tick up while the poor and poorly educated fall further behind.
For those people, on the arm of the K, Atwater said it’s “almost as if the outbreak never happened. That’s starkly different for people on the leg. If you are a small business person, work in the service industry, had to go back out into a manufacturing facility, a job in the ‘real world’, as it were, that has weighed heavily. Sadly it has weighed particularly heavily on minority communities at a time when they are the largest populations experiencing the outbreak. It’s a stacked inequity.”
“We talk about the American dream, the ability to pull yourself up by your bootstraps. Rags to riches. All this American mythology is being challenged by this extraordinary wealth divide,” said Atwater. “The rubber band has been pulled too far. People are uncomfortable with how divided we have become. At the same time I don’t think the wealthy appreciate how vulnerable they are to those who are out in the real world. They are not immune to the world around them.”
https://www.theguardian.com/us-news/2020/aug/16/us-inequality-coronavirus-pandemic-unemployment
Posted by ajohnstone at 6:42 pm