America’s food insecurity crisis was dire even before the Covid-19 pandemic, when at least 37 million people lived in households without adequate resources to guarantee consistent access to enough food for an active, healthy life.

Now, overall, about 54 million people across the US could go hungry without help from food banks, food stamps and other aid, according to an analysis by Feeding America, the national food bank network.


A record number of Americans face hunger this year as the catastrophic economic fallout caused by the coronavirus pandemic looks set to leave tens of millions of people unable to buy enough food to feed their families.
Nationwide, the demand for aid at food banks and pantries has soared since the virus forced the economy to be shutdown, resulting in more than 40m new unemployment benefit claims, according to the latest figures.
As a result, an estimated one in four children, the equivalent of 18 million minors, could need food aid this year – a 63% increase compared to 2018.
More than 11 million people in the states of Louisiana, Arkansas, Alabama, Mississippi, New Mexico, Texas and Tennessee are projected to suffer food insecurity in 2020. In Mississippi, proportionately the worst-affected state before and since the pandemic, almost three-quarters of a million people could need food aid this year, including one in every three children.


Larry Scott, chief operating officer of the Three Square food bank in Las Vegas where about 65% more food aid will be needed to stop people from going hungry: one of the biggest jumps in the country, said “People are going to go hungry, that’s the truth.”
The situation looks dire statewide: one in three children and one in five adults in Nevada are projected to suffer from food insecurity this year – a rise of almost 60% since 2018.

On Thursday in Tucson, Arizona, 1,400 or so cars lined up at a mobile distribution point, which was open for three hours, for grocery boxes of canned fruits, pinto beans, pasta, milk, fresh vegetables, frozen meat and bread, to help make ends meet for a month. Historically, there was a shortfall of 34m meals every year in the five counties served by the Community Food Bank of southern Arizona. Currently, the demand remains sky high – double pre-pandemic levels, and statewide 17% of the workforce have claimed unemployment since the start of the crisis. One in three children in Arizona could go hungry this year without food aid.


“We were getting darn close to closing the meal gap before the crisis,” said Michael McDonald, the CEO. “But if demand continues at this rate for the rest of the year or into next year, we’re going to fall way short. I don’t see us being able to keep up without a longer-term commitment from the federal government.”
Los Angeles county, where almost half the state of California’s Covid-19 cases have been confirmed, is projected to have 1.68 million food insecure people this year – the highest number in the country. It’s the most populous county in the US, with 10 million residents, where unemployment has risen to 20.3% – five percentage points higher than the state average – and food stamp applications have almost tripled compared with last year.
“If the numbers stay like this, no way food banks can cope, it’s beyond our capabilities, a lot will depend on how long federal help lasts,” said Michael Flood, president of the Los Angeles Food Bank, which has distributed 80% more groceries since the pandemic began. 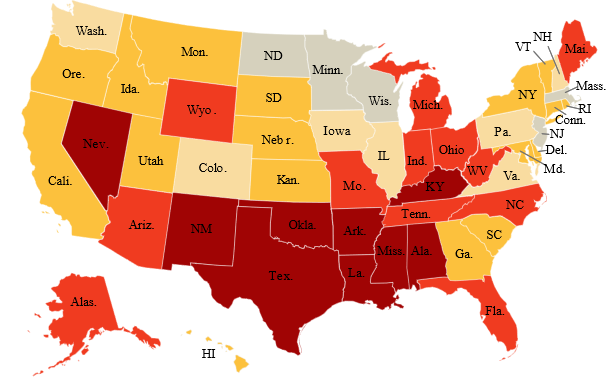