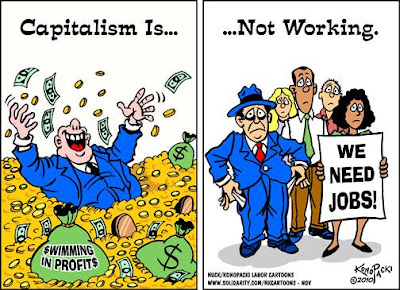 US billionaires accrued a huge windfall of more than $434bn in the two months between mid-March and mid-May. This comes at a time when at least 40 million Americans are out of work, struggling to get by, and 265 million people around the world are at risk of dying of hunger.
Jeff Bezos, who has seen his fortune expand by nearly $35bn thanks to the surge in the value of his company Amazon, as people trapped in lockdown have turned to online shopping.  It would take an American household earning the mean income of $60,000 a year nearly 2.5 million years to accumulate the estimated $147bn which Jeff Bezos is estimated to be worth... if they did not spend a penny. An  Amazon worker on the shop-floor would take more than 4 million years of saving their entire income to assemble their boss's fortune.  These are workers in the world's richest country. Now try to imagine how long it would take a poor worker in Asia or Africa to make this kind of money.
There are those who defend billionaires, arguing that critics are just envious and that billionaires deserve this success and earned their vast fortunes. Like the original rags-to-riches myth, there is a typical narrative that surrounds billionaires, especially those in the tech industry. It goes something like this:
X, working in their bedroom/garage/dorm, came up with a brilliant idea, against the odds, brought it to market and is now enjoying the fruits of their brilliance.


It is true that quite a few billionaires started off with nothing (or at least with a far more modest fortune), and many did exhibit inspiring brilliance in their early careers. However, is the smartness of these entrepreneurs really worth so much more than everyone else's labour  combined while front-line workers risk their health and lives to keep society functioning and care for the sick?
It goes without saying that nobody's ideas or work ethic or vision are worth thousands or even millions of years of everyone else's labour. This notion is particularly insulting in this time of crisis, when the people society depends on to function are not tycoons, top CEOs or hedge fund managers but nurses, doctors, emergency workers, care-givers, supermarket staff, delivery people and utility workers.


While there are certainly "good" billionaires and "bad" billionaires, there are no billionaires who made their billions fair and square, without employing ethically dubious practices. These practices may include underpaying or overworking staff, monopolising the productivity gains delivered by their workers, exporting jobs, stifling competition, and even exercising monopolies or near-monopolies via patent and intellectual ownership laws.
Corporate tax rates and taxes on high incomes and capital have hit historic lows, with a de facto regressive tax system increasingly becoming the new normal. In America, for example, the rich saw their wealth rise by over 1,100 percent between 1990 and 2018 yet their proportional tax obligations dropped 79 percent over the same time-scale.
And that is not to mention the tax avoidance schemes which there are many which has the capitalists laughing all the way to the bank, while the rest of are weeping with misery.
The unprecedented mobility of capital and wealthy individuals, facilitated by decades of deregulation and the absence of a global tax regimen or coordination of tax policies, has enabled many corporations and billionaires to transfer their profits to tax paradises, allowing them to dodge their tax burdens and, with them, their social responsibilities. This has also forced a race to the bottom between countries fearful of losing out to tax havens. The IMF estimates that governments are deprived of up to $600bn a year in corporate taxes due to the kind of clever bookkeeping that has been made possible through decades of financial deregulation and walks the fine line between legal "tax avoidance" and illegal "tax evasion". 40 percent of the profits of multinationals are artificially transferred to tax havens from higher-tax countries, especially in Europe.
To add insult to injury, not only has deregulation devastated the welfare state, but also among the biggest recipients of state welfare are, paradoxically, the richest, who benefit the most from the rescue packages designed to pull us out of crises, especially in the US. This occurred during the Great Recession following the financial meltdown of 2008-2009 and is happening again during the current coronavirus crisis.

Philanthropy by Gates, Buffet and others of the mega-rich is no substitute for social justice. It puts what should be a collective decision-making process on societal priorities in the hands of unelected individuals, who may or may not be concerned about the greater good. This gigantic concentration of wealth gives billionaires the kind of political clout that makes a mockery of the one person, one vote foundation of democracy. We are used to the business class representing a powerful oligarchy in authoritarian and autocratic regimes, such as in Russia or the Arab world. In democracies, the massive lobbying power, both direct and indirect, of the billionaires and corporations erodes democratic governance and undermines the will of the electorate.

Taken and adapted from here
https://www.aljazeera.com/indepth/opinion/deserves-billionaire-200524115936784.html 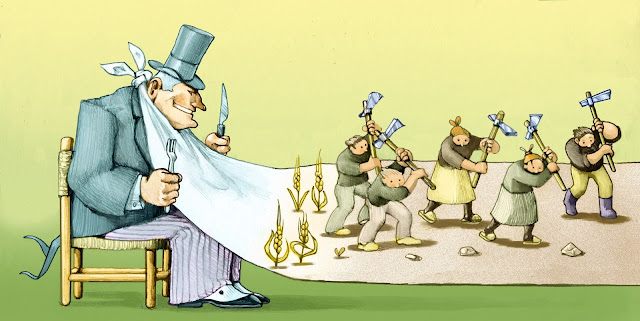