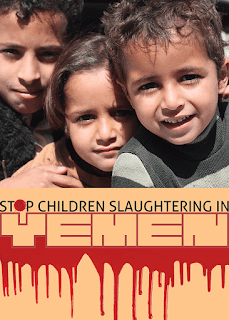 Two weeks after a coalition air attack on a school bus killed at least 29 children UN’s humanitarian chief, Mark Lowcock, confirmed that yet another coalition airstrike on Thursday had killed 22 children and four women who were trying to escape the fighting in the Durayhimi district, in the Hudaydah governorate. He said a second attack in the same area that day had killed a further four children.

“I am also deeply concerned by the proximity of attacks to humanitarian sites, including health facilities and water and sanitation infrastructure,” he said. "People need to be able to voluntarily flee the fighting to access humanitarian assistance too. The parties to the conflict must respect their obligations under international humanitarian law and those with influence over them must ensure that everything possible is done to protect civilians.”


Henrietta Fore, the executive director of Unicef, said: “I had hoped that the outrage that followed the Saada attack in Yemen two weeks ago would be a turning point in the conflict. Yesterday’s reported attacks in Ad-Durayhimi, killing 26 children, indicate that it was not."
Posted by ajohnstone at 3:46 am