There is power in the union 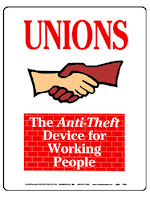 University of Illinois sociology professor Tom VanHeuvelen found that the magnitude of association between unionization and wage inequality in those previous studies is cut by about half once those worker characteristics are taken into account. What remains, however, is "remarkably robust," he said.
"I find that both the direct and indirect effects of union decline are just really robust as you track people along their careers. It means that if unions had stayed strong, it's likely the typical wage attainment of people would have been higher, and it's likely that wages would have been more predictable and less volatile."
The unionization-inequality connection remains even when looking only at nonunion members, or at union members in only public or only private sectors, VanHeuvelen said. For instance, the study suggests that nonunion workers would have seen 3 to 7 percent higher wage growth over their careers if not for the decline in the indirect power of unions.

In speaking of the direct effects of union decline, VanHeuvelen is referring to unions' ability to bargain and advocate for their members. The indirect effects are those coming from the unions' influence in building social networks and in advocating for public policies or programs—work hour restrictions, job security, health care access, food stamps, etc. - that benefit all worker households, both union and nonunion.