"Even wars have rules and such rules must be respected.”

Not headline news but what do we expect from a mass media intent upon parroting the government line and protecting the interests of the British business class. 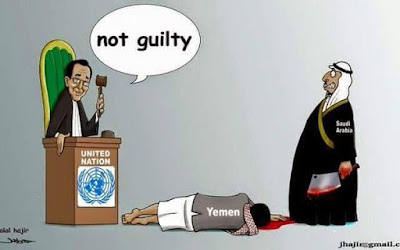 A senior United Nations official in Yemen has condemned the Saudi-led air strike which killed at least 12 civilians, including children, saying it showed a complete “disregard” for human life. Three women and six children from the same family were killed as they slept in the dawn air strike by the Saudi-led coalition. The youngest of the children killed was just two years old.
UK’s humanitarian coordinator in Yemen, Jamie McGoldrick, expressed “deep concern” about the Saudi-led action in an official statement in which he accused the coalition of violating international law.  "They are an example of the brutality in which the conflict is being conducted," he said. "All parties to the conflict continue to show a disregard for the protection of civilians and the principle of distinction between civilians and combatants in the conduct of hostilities."
The war has led to one of the worse humanitarian crises in recent history, displacing more than three million people and killing at least 10,000 through famine and the worst outbreak of cholera in living memory. The Red Cross has warned an estimated 600,000 people could contract cholera as the epidemic sweeps through Yemen, where around 70 per cent of the population of 27 million is now reliant on some form of humanitarian aid. A total of 14.5 million people do not have regular access to clean water and 7.3 million live on the brink of famine, while less than half of the country’s medical centres are still functional.
Saudi Arabia and its allies have been accused of exacerbating the crisis by obstructing the delivery of fuel for UN planes, which are attempting to bring aid into the starving country. The UK has been criticised for selling arms to Saudi Arabia which are known to have been used against the Yemeni people.
SOYMB may sympathise with the sentiments of  McGoldrick but after all the history of wars and their accompanying atrocities, he is being naive to believe that war can be organisd and conducted in a humane way. The victors will determine what methods of waging war are "just".
Posted by ajohnstone at 8:06 am