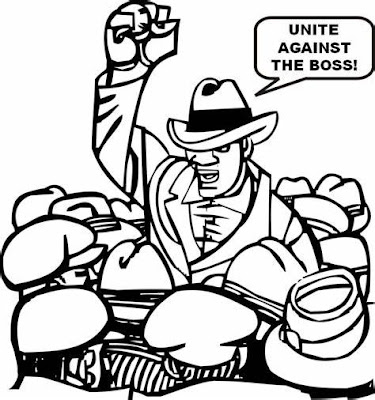 A new report from Chris Bohner, who runs the labor research firm Radish Research, has done an amazing service by systematically assembling thousands of financial records from unions over the past decade to assemble a report that gives the most comprehensive picture.

The report shows that even as union density has continued its long decline over the past decade, the financial coffers of unions have expanded. That money, however, has not been used to do the organizing necessary to prevent all of those unions from shrinking.

The $29.1 billion in net assets for unions, by the way, does not include the value of union pensions — which hold trillions of dollars in assets themselves. Those pension assets could and should be strategically invested with the goal of strengthening the labor movement.
Those tens of billions, though, could accomplish a lot. Bohner, in his report, has a few suggestions: Hiring 20,000 new union organizers ($1.4 billion per year), supercharging spending on strike benefits ($1 billion per year), and funding ​“a new $3 billion entity (or entities) that could engage in riskier civil disobedience activities, like illegal strikes, secondary boycott activities, or defying restrictive court injunctions on picketing and protest.”
The conclusion of the report is that:
"There is no “One Big Union,” but over ten thousand union entities grouped in over 100 union affiliations. Some unions have doubled down on spending, others have run large surpluses and kept their spending lower than the growth in revenue. Unions in growing sectors have prospered, other unions have struggled to maintain relevancy in declining sectors. Nevertheless, looking at organized labor collectively, the trends are clear: over the last decade, labor has nearly doubled its net assets, run large surpluses, reduced the workforce while increasing pay at the top, and spent less than the rate of inflation–all while union membership has declined.
Rather than from leaders at the top like Shuler, change is most likely to come from the broad movement of workers striking against global corporations in defiance of their union leadership, and winning, such as at Deere and Kellog; reform movements seeking to democratize their bloated and/or corrupt union bureaucracies (such as the Teamsters and UAW); public sectors workers, many without a formal union, disobeying state bans on strikes (like the Red Ed teacher strikes); members defying the political directives of their union leadership to back left candidates offering real structural change (like the members of the Culinary Workers Union supporting Bernie Sanders in the 2020 caucus); the autonomous wildcat labor actions during the pandemic by “unorganized” workers; independent unions like the Amazon Labor Union defying conventional wisdom and winning at one of the most powerful companies in the world; and most critically, the young workers and union organizers who are impatient for change, intolerant of bureaucratic hierarchies, and far more open to consider alternatives to capitalism than a union leadership still trapped in the ideological straightjacket of the Cold War. It is this constellation of forces that could seize the assets from a labor movement that has failed to seize the moment."
The full Radish Research report is here
Posted by ajohnstone at 1:06 pm