Americans were told they had to invade Iraq because Saddam Hussein was an evil dictator. They had to bomb Libya because Muammar Gaddafi was an evil dictator, bent on unleashing a “bloodbath” on his own people. Today, of course, they are told that we should support insurgents in Syria because Bashar al-Assad is an evil dictator, and they must repeatedly rattle our sabers at North Korea’s Kim Jong-un and Russia’s Vladimir Putin because they, too, are evil dictators.
This is part of the larger, usually unquestioned mainstream corporate media narrative that the US leads the “Western democracies” in a global struggle to combat terrorism and totalitarianism and promote democracy.  Does the US government actually oppose dictatorships and champion democracy around the world, as people are repeatedly told?
The answer is No. According to Freedom House’s rating system of political rights around the world, there were 49 nations in the world, as of 2015, that can be fairly categorized as “dictatorships.” As of fiscal year 2015, the last year for which we have publicly available data, the  United States had been providing military assistance to 36 of them. The United States currently supports over 73 percent of the world’s dictatorships!
Tens of billions of dollars’ worth of US military assistance has been provided to the beheading capital of the world, the misogynistic monarchy of Saudi Arabia, and the repressive military dictatorship now in power in Egypt. Apologists  try to rationalize such support, arguing that Saudi Arabia and Egypt are exceptions to the rule. They  argue that broader national interests in the Middle East require temporarily overlooking the oppressive nature of those particular states, in order to serve a broader, pro-democratic end-game.
Hogwash.
Such justifications can be critiqued on many counts, of course, beginning with its class-biased presumptions about what constitutes US “national interests.” The US government’s support for Saudi Arabia and Egypt are not exceptions to the rule. They are the rule.
By Freedom House’s measure, the 49 nation-states that could be fairly characterized as dictatorships in 2015, are:
Afghanistan, Algeria, Angola, Azerbaijan, Bahrain, Belarus, Brunei, Burundi, Cambodia, Cameroon, Central African Republic, Chad, China, Democratic Republic of the Congo (Congo-Kinshasa), Republic of the Congo (Congo-Brazzaville), Cuba, Djibouti, Egypt, Equatorial Guinea, Eritrea, Ethiopia, Gabon, Gambia, Iran, Jordan, Kazakhstan, Laos, Libya, Mauritania, Myanmar, North Korea, Oman, Qatar, Russia, Rwanda, Saudi Arabia, Somalia, South Sudan, Sudan, Swaziland, Syria, Tajikistan, Thailand, Turkmenistan, Uganda, United Arab Emirates, Uzbekistan, Vietnam and Yemen.
Freedom House included in its ratings several other entities with a  whose status as an independent state was itself disputed:
Crimea, the Gaza Strip, Pakistani Kashmir, South Ossetia, Tibet, Transnistria, the West Bank and Western Sahara. 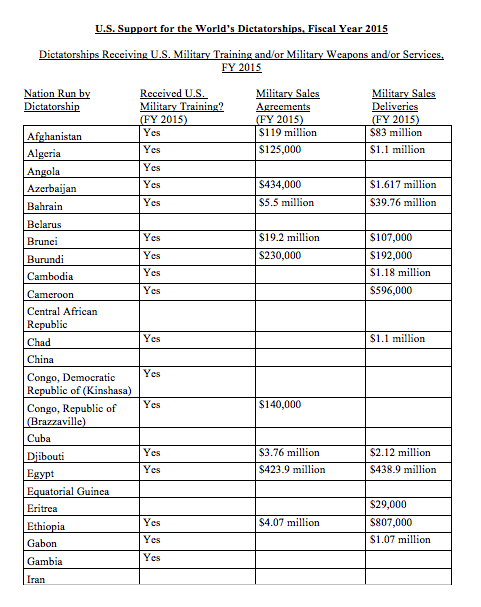 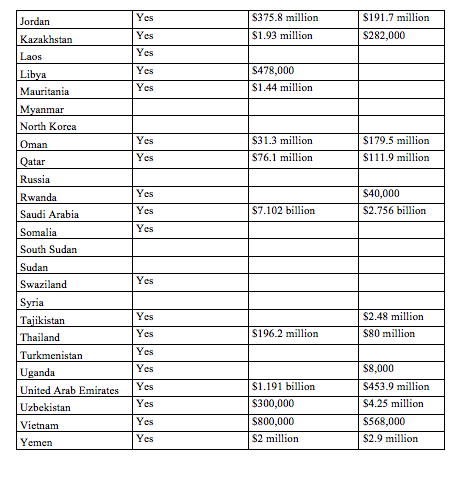