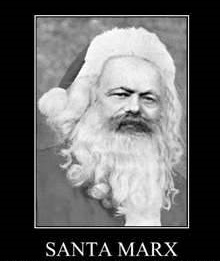 Long before Christianity a festive break during the dark, cold winter months helped people to get through the most trying time of the year. To replace celebration of the winter solstice, early Christians decided to celebrate the birth of Christ on 25 December; historically incorrect, but necessary to combat the appeal of the heathen festivities. Christmas developed from an ancient pagan festival: both the date and superstitions like the mistletoe are of pre-Christian origin. It is supposed to celebrate the birth of "Jesus Christ", a possibly legendary figure claimed as the Messiah and as a demi-god.The religious want to rejoice in fantasies about a messiah born of a virgin. He is the focal point of one the most powerful and widespread, oppressive and stultifying religious movements that have tortured humanity.

Nowadays Christmas is primarily a secular festival. The rat-race is suspended for a day or two. It is customary at this time of year to speak of Peace on Earth and Good Will To All Men yet the tragedy of an outmoded and insane social organisation continues as usual. Think of its poverty and destruction in the midst of actual or potential plenty. Slums, famines, eco-system destruction, waste, and strife of all kinds.

It cannot be said too often that the effects of capitalism are unavoidable as long as the system endures. Capitalism inexorably produces war, poverty and human degradation and these problems will not be abolished by seeking a change in hearts but through a revolutionary upheaval. Anything — like the Christmas good cheer — which attempts to persuade us otherwise is an episode in hypocrisy and delusion. Christmas is a festival of fake sincerity; the most dishonest season of the year. It is a time for buying what can't be afforded and selling what would not sensibly be wanted. So, away with all this bogus goodwill.


Humanity has the means—technical, material, organisational—to build a new world of freedom, harmony and enough for all.  A world in which we all own and share the means of life in common in the interests of all. A world fit to celebrate.

Alan, I share your views and all the same wish you well at this time. James