Trump's wall is already there 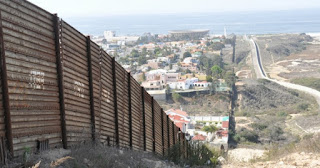 Operation Streamline is a cornerstone program in the “Consequence Delivery System,” part of a broader Border Patrol deterrence strategy for stopping undocumented immigration, is just one part of a vast enforcement-incarceration-deportation machine. The program is as no-nonsense as its name suggests. Since Operation Streamline was launched in 2005, 750,000 prison sentences have been handed down This mass prosecution of undocumented border crossers has become so much the norm that one report concluded it is now a “driving force in mass incarceration” in the United States. It matters not whether you crossed “illegally” or you didn’t. It doesn’t matter why, or whether you lost your job, or if you’ve had to skip meals to feed your kids. It doesn’t matter if your house was flooded or the drought dried up your fields. It doesn’t matter if you’re running for your life from drug cartel gunmen or the very army and police forces that are supposed to protect you. In 2013 alone, Immigration and Customs Enforcement carried out 72,000 deportations of parents who said that their children were U.S.-born. And many of them are likely to try to cross that dangerous southern border again to reunite with their families.

Yet it is but a single program among many overseen by the massive U.S. border enforcement and incarceration regime that has developed during the last two decades, particularly in the post-9/11 era. In those years, the number of Border Patrol agents had, in fact, quintupled from 4,000 to more than 21,000, while Customs and Border Protection became the largest federal law enforcement agency in the country with more than 60,000 agents. The annual budget for border and immigration enforcement went from $1.5 to $19.5 billion, a more than 12-fold increase. By 2016, federal government funding of border and immigration enforcement added up to $5 billion more than that for all other federal law enforcement agencies combined.

The ever-increasing border policing and militarization funneled desperate migrants into remote locations like the Arizona desert where temperatures can soar to 120 degrees in the summer heat. The first U.S. border strategy memorandum in 1994 predicted the tragic future we now have. “Illegal entrants crossing through remote, uninhabited expanses of land and sea along the border can find themselves in mortal danger,” it stated. 6,000 remains have been found in the desert borderlands of the United States. The Colibri Center for Human Rights has records for more than 2,500 missing people last seen crossing the U.S.-Mexico border. In other words, that border has become a graveyard of bones. Despite all the attention given to Trump’s wall and the border this election there has been little or no mention of this existing and long-standing “humanitarian crisis” of deaths that have increased five-fold over the last decade. The wall already exists. 2.5 million people have been expelled from the country by the Obama administration, an average annual deportation rate of close to 400,000 people.  This was, by the way, only possible thanks to laws signed by Bill Clinton in 1996 which vastly expanded the government’s deportation powers.

A real wall’s  construction began during Bill Clinton’s administration but the Department of Homeland Security (DHS) built most of the approximately 700 miles of fencing after the Secure Fence Act of 2006 was passed. At the time, Senator Hillary Clinton voted in favor of that Republican-introduced bill, along with 26 other Democrats. "I voted numerous times when I was a senator to spend money to build a barrier to try to prevent illegal immigrants from coming in,” she commented at one 2015 campaign event, "and I do think you have to control your borders." Hillary Clinton’s promise of “comprehensive immigration reform” -- to be introduced within 100 days of her entering the Oval Office -- is a much more reliable guide than Trump’s wall to our grim immigration future. If her bill follows the pattern of previous ones, as it surely will, an increasingly weaponized, privatized, high-tech, layered border regime, increasingly dangerous to future migrants, will continue to be a priority of the federal government. On the surface, there are important differences between Clinton’s and Trump’s immigration platforms. Trump’s xenophobic comments and declarations are well known, and Clinton claims that she will, among other things, fight for family unity for those forcibly separated by deportation and enact “humane” immigration enforcement.  Yet the policies of the two candidates are far more similar than they might at first appear.

The 2006 wall-building project was expected to be so environmentally destructive that homeland security chief Michael Chertoff waived 37 environmental and cultural laws in the name of national security.  In this way, he allowed Border Patrol bulldozers to desecrate protected wilderness and the sacred land of indigenous peoples. With a price tag of, on average, $4 million a mile, these border walls, barriers, and fences have proven to be one of the costliest border infrastructure projects undertaken by the United States. For private border contractors, on the other hand, it’s the gift that just keeps on giving. In 2011, for example, the DHS granted Kellogg, Brown, and Root, a subsidiary of Halliburton, one of our “warrior corporations,” a $24.4 million upkeep contract. The post-9/11 border is now both a war zone and a showcase for corporate surveillance.  It represents, according to Border Patrol agent Felix Chavez, an “unprecedented deployment of resources” with  hundreds of remote video or mobile surveillance systems, or one of the more than 12,000 implanted motion sensors that set off alarms in hidden operational control rooms where agents stare into large monitors. There are spy towers made by the Israeli company Elbit Systems, or Predator B drones built by General Atomics, or VADER radar systems manufactured by the defense giant Northrup Grumman that, like so many similar technologies, have been transported from the battlefields of Afghanistan or Iraq to the U.S. border.

If the comprehensive immigration reform that Hillary Clinton pledges to introduce as president is based on the already existing bipartisan Senate package, as has been indicated, then this corporate-enforcement landscape will be significantly bolstered and reinforced. There will be 19,000 more Border Patrol agents in roving patrols throughout “border enforcement jurisdictions” that extend up to 100 miles inland. More F-150 trucks and all-terrain vehicles will rumble through and, at times, tear up the desert. There will be more Blackhawk helicopters, flying low, their propellers dusting groups of scattering migrants, many of them already lost in the vast, parched desert. If such a package passes the next Congress, up to $46 billion could be slated to go into more of all of this, including funding for hundreds of miles of new walls. Corporate vendors are salivating at the thought of such a future and in a visible state of elation at homeland security tradeshows across the globe. Included in that bill was, of course, funding to bolster Operation Streamline. G4S has a lucrative quarter-billion-dollar border contract with Customs and Border Protection to transport shackled prisoners to a Corrections Corporation of America private prison in Florence, Arizona where migrants are held behind layers of coiled razor wire, while the corporation that runs the prison makes $124 per day for incarcerating each of them.

Imagine there's no nations. People free to go wherever they want.
Posted by ajohnstone at 8:00 pm