Africa - Up For Grabs 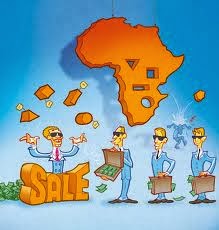 A G8 initiative to boost agriculture and relieve poverty has been damned as a new form of colonialism after African governments agreed to change seed, land and tax laws to favour private investors over small farmers. Ten countries made more than 200 policy commitments, including changes to laws and regulations after giant agri-businesses were granted unprecedented access to decision-makers over the past two years. But small farmers, who are supposed to be the main beneficiaries of the programme, have been shut out of the negotiations. The pledges will make it easier for companies to do business in Africa through the easing of export controls and tax laws, and through governments ring-fencing huge chunks of land for investment. The CEOs of companies including Unilever and the agribusiness giants Syngenta, Yara and Cargill have had seats on the leadership council. Companies have refused to make their full investment plans under the New Alliance available for public scrutiny, and freedom of information requests to the UK government were rejected on the basis of commercial confidentiality.

Colin Poulton, a research fellow at the centre for development, environment and policy at the School of Oriental and African Studies in London, told the Guardian, “ The New Alliance is so far primarily an initiative to commercialise agriculture in Africa."

Zitto Kabwe, the chairman of the Tanzanian parliament's public accounts committee, said he was "completely against" the commitments his government has made to bolster private investment in seeds. "By introducing this market, farmers will have to depend on imported seeds. This will definitely affect small farmers. It will also kill innovation at the local level. We have seen this with manufacturing," he said. "It will be like colonialism. Farmers will not be able to farm until they import, linking farmers to the vulnerability of international prices. Big companies will benefit. We should not allow that."

The Ethiopian government has said it will "refine" its land law to encourage long-term land leases and strengthen the enforcement of commercial farm contracts. In Malawi, the government has promised to set aside 200,000 hectares of prime land for commercial investors by 2015, and in Ghana, 10,000 hectares will be made available for investment by the end of next year. In Nigeria, promises include the privatisation of power companies. Tanzania's tax commitments would benefit companies rather than small farmers.

Olivier de Schutter, the UN special rapporteur on the right to food, said governments had been making promises to investors "completely behind the screen", with "no long-term view about the future of smallholder farmers" and without their participation. He described Africa as the last frontier for large-scale commercial farming. "There's a struggle for land, for investment, for seed systems, and first and foremost there's a struggle for political influence."

The Alliance for Food Sovereignty in Africa has also denounced the G8 initiative as ushering in a new wave of colonialism on the continent. Million Belay, the head of the AFSA, said the initiative could spell disaster for small farmers in Africa. "It clearly puts seed production and distribution in the hands of companies," he said. "The trend is for companies to say they cannot invest in Africa without new laws … Yes, agriculture needs investment, but that shouldn't be used as an excuse to bring greater control over farmers' lives. More than any other time in history, the African food production system is being challenged. More than any other time in history outside forces are deciding the future of our farming systems."

Critics of the New Alliance have questioned how it will help poor farmers. A document shows the initiative is based on assumptions about how investment can reduce poverty and has set no specific targets for its stated goals of boosting food security and nutrition on the continent.

Kato Lambrechts, Christian Aid's senior advocacy and policy officer, said: "Governments have signed on to promise to fast-track or implement policies, regulations or laws that need to be further discussed and debated in-country. The concern is that these are being pushed through in exchange for new private sector commitments to invest in agriculture value chains, which cannot be a substitute for well-developed and comprehensive policies that address the needs of poor farmers to allow them to move out of poverty."

Benito Eliasi, from the Southern African Confederation of Agricultural Unions, which has represented civil society on the leadership council, said: "The implementation of legislation is one of the biggest problems facing farmers in Africa. We need to safeguard farmers … Farmers need to be involved. If they are not involved, this will fail."

Gawain Kripke, Oxfam America's policy director, said insufficient consultation with civil society and farmers was a fatal flaw. "There's a 100-year history of failed development projects in Africa and around the world …”

Even Tony Burdon, Department of International Development's head of growth and resilience, admitted that more consultation could have taken place with civil society and farmers' groups, and that companies could be more transparent about their investment plans, which he described as "light on detail" in some cases.

Posted by ajohnstone at 1:54 am