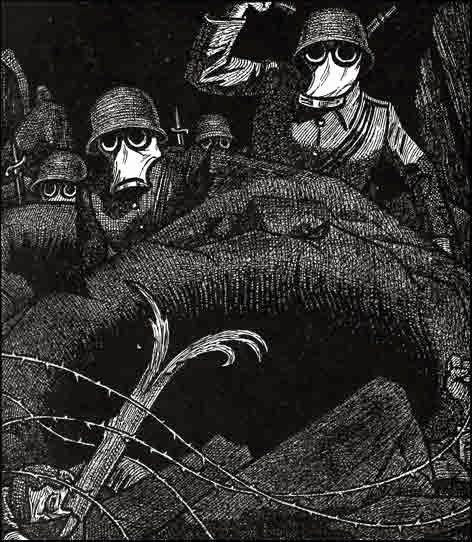 10-plus million people were killed in the First World War. Explaining the horror of war is difficult for those who take existing society for granted. They are driven to conclude that there is some innate, instinctive drive in human beings that leads them to enjoy mass slaughter. But human society has not always known war. War is not caused by some innate human aggressiveness. It is a product of the division of society into classes and meant that war has become a permanent feature of human life. Many people want capitalism but not war. Some believe a more effective United Nations can prevent war. But the UN is merely the arena where different states that embody the drive to war meet together. There they compare their strengths with each other, like boxers sparring before a bout. You can loathe and fear war without opposing capitalist society. But you cannot end it. War is the inevitable product of the division of society into classes. The threat of it will never be ended by begging the existing ruling classes  to make peace.  The only power capable of stopping war is the working class. Only socialist revolution can end the horror of war.

...Our object was not to bid defiance to a world gone mad, but to place on record the fact that in this country the Socialist position was faithfully maintained by the Socialists. With this object in view we placed our backs against the wall and fought. Our platforms were smashed up and our members injured by mobs egged on by bourgeois cowards who, as usual, had not the spunk to do their own fighting for themselves. Not this only : one of our speakers was arrested and imprisoned, while others were dragged before the magistrates and "bound over to keep the peace." In some instances the proceedings were rounded off by the victims being discharged from their employment by their "good, kind masters" for daring to hold political opinions of their own....

...But now we are faced with a new situation. On the 28th of November last were issued Orders in Council (Defence of the Realm [Consolidation] Regulations) which render the prosecution of our propaganda a work of extreme peril.. ..In face of these restrictions and penalties the Executive Committee of the Socialist Party decided to suspend propaganda meetings for the time being, and called a meeting of Party members, at which meeting their action was endorsed.

We are aware, of course, that we lost an unique opportunity of indulging in heroics. We shall be told, perhaps, that we ought to have gone on in defiance of the powers that be till we went down in a blaze of fireworks. Our view, however, was the sane one dictated by our avowed principles. We have always held that the supreme power is in the hands of those who control the political machine. The most we could hope for by going on was to prove that contention. But it is not for us to prove our contentions by acting in opposition to them...we suspend propaganda meetings for the time, and confine our activities to such forms of propaganda as would secure us from any attack that did not reveal the deliberate intention of our opponents to crush us under the cloak of the present situation.