Religion and the Socialist Party 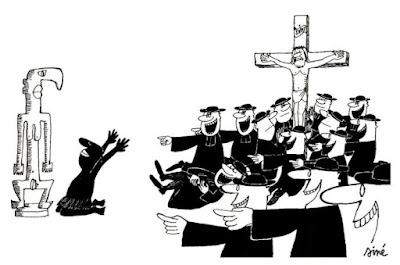 We’ve all heard  Jesus was a  socialist and even of Mohammed, the socialist. In truth, religion has slavishly adapted itself to the needs of the hour. The need of the hour for us is to put before the workers the knowledge which will enable them to recognise the class nature of society and its government as the true explanation of social chaos. As socialists, indeed, our main attack must be against the entrenched political power of capitalism, and to this, all else must be subordinated; but the war on religion, which is the power of inertia of human development, is part of the work that must be done in that great struggle. Furthermore, we assert that it has been consciously used as a bulwark to discourage active thought by the workers on the why and wherefore of capitalist supremacy and privilege. We do not dispute the fact that socialism cannot be achieved by a working class that believes in the supernatural. Socialism is based on the scientific interpretation of history. Religion is part of that history and is the result of man's ignorance of natural forces. With their progress in the knowledge of socialism, the workers must, therefore, shed their superstitions and become materialistic in their outlook.

The revival of authoritarian churches is a growing problem. Socialists oppose religion for its anachronistic premises, and for the barrier, it presents to scientifically examining and controlling our own lives and destinies. We refute religion because the working class cannot move forward to a better society while their minds are in the chains of religion. The claim has sometimes been made that religion in the modern world is a unifying force rising above national barriers. The war in Ukraine has shown again how little truth there is in this with the  Orthodox church now divided between pro-Russian and pro-Ukraine churchmen.

Socialism arouses the workers' will to struggle, it appeals to their understanding; it demands their knowledge and confidence. Religion blunts their faculties and turns their minds to celestial happiness. In common with other religions, Christianity makes virtues of meekness and poverty. This degrading teaching has served well in keeping the workers docile and submissive. We have never underestimated the power of religion when used by an unscrupulous ruling class to mystify the minds of those they ruled