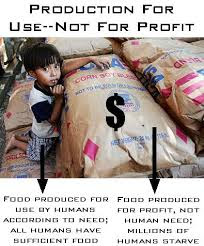 The modern market society that we call capitalism have brought all the historic problems of economic exploitation to a head. No government will ever take the radical steps needed to reverse the ecological crisis if this is against capitalist interests. It is all too common these days to single out either population growth or technology — or both — to blame for the ecological problems that beset us. But we cannot single out either of these as “causes” of problems whose most deep-seated roots actually lie in the market economy. Attempts to focus on these supposed “causes” deceptively shift our focus from the social issues we must resolve. The whole system of production and distribution must be transformed, and this can be done only by establishing socialism, i.e. the common ownership and democratic planning of the economy that takes into account the preservation of the ecological balance. Society itself, and not a small oligarchy of property-owners nor an elite of techno-bureaucrats will be able to choose, democratically, what is produced and prioritized. Products and services will be distributed free of charge, according to the will and needs of the citizens. Far from being by nature “despotic,” planning is the exercise by a whole society of its freedom: the freedom to make decisions. Under capitalism use-value is only a means — often a trick — at the service of exchange-value and profit—which explains, by the way, why so many products in the present society are substantially useless—in a planned socialist economy the use-value is the only criterion for the production of goods and services, with far reaching economic, social, and ecological consequences. As the eco-socialist writer, Joel Kovel, observed, “The enhancement of use-values and the corresponding restructuring of needs becomes now the social regulator of technology rather than, as under capital, the conversion of time into surplus value and money.”

Socialist planning is based on the principle of a democratic debate on all the levels where decisions are to be taken: different propositions are submitted to the concerned people, delegates elected at the local, regional and global level. What guarantee is there that the people will make the correct ecological choices, even at the cost of giving up some of their habits of consumption? There is no such “guarantee,” other than rest upon the rationality of democratic decisions, once the power of commodity fetishism is broken. This does not mean that conflicts will not arise between the requirements of protecting the environment and social needs, between the ecological imperatives and the necessity of developing basic infra-structures. A classless society is not a society without disagreements. These are inevitable: it will be the task of democratic planning in a socialist society, liberated from the imperatives of capital and profit-making, to solve them, through open discussion, leading to decision-making by society itself. Such a grassroots and participatory democracy is the only way, not to avoid errors, but also to collectively self-correct its own mistakes.

Socialism is only an objective possibility, not the inevitable result of the contradictions of capitalism or of the “iron laws of history.” One cannot predict the future. However, we can be sure that in the absence of the socialist transformation, the inherent logic of capitalism will lead the planet to ecological disaster, threatening the health and the life of billions of human beings, and perhaps even the survival of our species. There is no reason for optimism. The ruling class is incredibly powerful, and the forces of the socialist opposition still infinitesimally small. But it is the only hope that the catastrophic course of capitalist “growth” will be halted.
Posted by ajohnstone at 6:00 am