If the climate was a bank, it would be saved. 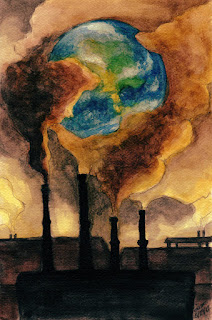 “Making Poverty History” was a cynical sham. The Paris climate talks will follow the same path. The mass media projected the impression that global poverty was on the way out, because of pledges made at a G8 summit in Gleneagles, Scotland, in 2005. The Make Poverty History campaign can tell us something about the importance of being honest about what the great powers are doing, and, more, the need to continue forcing them to not only live up to their promises, but to exceed them. The Paris Climate Change Conference has probably failed before it has begun – a 2C temperature rise in itself is catastrophic and is now inevitable. Humanity is faced with an urgent new task to do everything we can to make the future “less bad” Destructive and deadly capitalism has allowed the rich to get richer at the expense of humanity and the biosphere which means we must urgently replace it by science-based planning. The planet is burning and we expect the arsonists to be the fire-fighters to quench the flames.

“Humanity is currently at a juncture where it either saves itself from the profits system or dissolves into ever deeper barbarism and environmental self-annihilation. The problem with capitalist “growth” isn’t just how its outcomes are distributed. It also and relatedly what that growth is doing does to livable ecology, which amounts to environmental self-annihilation by all serious scientific accounts now. That’s not just a difficulty with “casino capitalism” – the hyper-financialized neoliberal and global capitalism of the last four plus decades – that Sanders feels save denouncing. It’s a problem with any and all phases and forms of capitalism, including even and indeed especially the anomalously high-growth Keynesian capitalism of the post-World War II era, when U.S.-led world capitalist expansion brought humanity to the precipice of full environmental catastrophe. These are basic facts of species life and death that Sanders and cannot or will not publicly acknowledge,” explains Paul Street

People are ready for radical solutions. The masters of society are now obliged to speak of climate change and to combat it (because, after all, they live on the same planet as we do.) However, the point is that the climate crisis has been caused by the normal operation of capitalism. Why then should we look to pro-capitalist economists to fix it? Albert Einstein himself said that maybe we shouldn’t fix a problem with the system that created it.

Socialism is rebalancing of the world — transforming society to a more ecocentric production method. Socialists understand the crises of social inequalities and environmental catastrophe as inextricably linked. In the current political economic system of capitalism, where profit is the highest goal attained by growth at all costs, we see mass social inequalities and a devastated climate as symptoms of a systemic malady. As socialists, we do advocate common ownership and believe communities should be able to control their common resources. Many use the “tragedy of the commons” as a critique of collective ownership of a common good, when public control over common goods like fresh water, clean air and the land that sustains our food production is in fact the solution to this problem. The tragedy of the commons is a problem generated by each individual maximising his or her private good, a central tenet of free-market capitalism. Some apologists of this private property argue that when a good is private, people will be careful not to deplete the resource on their own property, because costs will be incurred by the individual actor. Yet one of the reasons we have an environmental crisis is that business does not have to pay the full costs of their operation in terms of either resources depleted or toxic waste and greenhouse gases produced, costs which economists tellingly refer to as “externalities.” Socialists see this devastation of the natural world as yet another contradiction of capitalism” (the first being the incentive of employers to drive down wages as much as possible).

The bottom line is green capitalism will not save us when profit is the driving force. It is not just a case of a few greedy executives or some “bad apples” but the case of green-washing (creating a false environmentally-conscious image by appropriating environmental concern to expand markets) can be seen across industries all over the world. The climate crisis cannot be solved within the logic of capitalism. This is the reality of global capitalism. This is the product of this system, the market is God Mammon where everything is sacrificed on the altar of profit. Socialism aims for an economic system based on human need and the end of the gross inequalities that exist everywhere today and emphasises the ecological through respect and stewardship of our natural environment and lessening the devastating impact of our economic activity on the very basis of life.