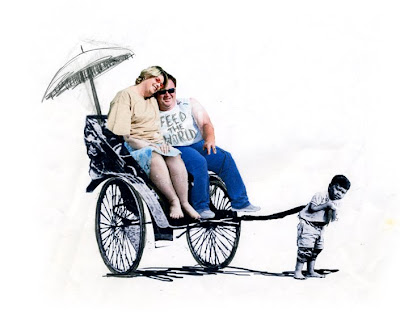 Slum tourism is taking off in Kenya. Several local organisations have started selling guided trips through Kibera, a short drive from the luxury hotels that serve most foreign visitors in Nairobi.

According to The Guardian for about £20, tourists are promised a glimpse into the lives of the hundreds of thousands of people crammed into tiny rooms along dirt paths littered with excrement-filled plastic bags known as "flying toilets", as one tour agency explains on its website.

Critics say Kibera's sole attraction is its open-sewer poverty – with residents on parade like animals in a zoo.

The film "Slumdog Millionaire" set in the slums of Dharavi in Mumbai resulted in boom times for tourist agencies . The hottest draw for western tourists in search of India’s “squalor and misery”. The “highlights” of Dharavi sight-seeing include a stop at a stall of six toilets that serves 16,000 people and a stroll alongside a river so black and septic that it oozes rather than flows.

But after reports of malnutrition in children at Bhandup it have strangely added to the curiosity of foreign tourists, leading to a demand for an expansion of slum walkthroughs through that area as well.

"The slum tourism of Mumbai paves the way for the curious tourists from all over the world to know and explore the life of people living here, that is full of struggle for existence but still make them happy." says one website