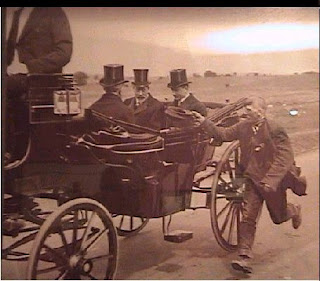 The Guardian has an article on new Joseph Rowntree Foundation report on UK poverty and the media and its findings that there isn't much popular concern over UK poverty and places much of the blame on the media, saying there is little appetite to address themes of poverty. In newspapers, the subject is "worthy, not newsworthy", and journalists found it was often "difficult to give poverty a focus, since it is ongoing and amorphous rather than a specific 'event'". In other words , to paraphrase the Bible , the poor are always with us .

Why don't we have celebrities singing "Let them know it's Christmas time" to raise money for the 3 million or so children in this country living below the poverty line? Why is there no Bono or Bob Geldof marshalling the campaign to end child poverty? Why can't campaign groups rouse sufficient outrage to get the public marching on the streets.

"The voices of people with experience of poverty...are severely under-represented in media coverage," says the report. On television, there is a danger of poverty turning into a "spectator sport" that entrenches an "us and them" mentality, the report also warns.

"There is very little sympathetic portrayal of poor people. And people are looking for reassuring images, that things are OK, things are fair and that people at the bottom are there because it’s their fault and therefore we’ve all earned on merit our position." (Political commentator)

As a result of this information shortage, many doubt whether there is "real" poverty in the UK and are unconvinced by the concept of relative poverty – the measure by which the government measures deprivation here. The public is either "harshly judgmental" towards people living in poverty or views poverty and inequality as inevitable.The trend of judging individuals as creators of their own poverty seems to be increasing. Journalists quite often used stereotypical pictures and words to refer to people living in poverty. Public awareness of the extent and reality of UK poverty is limited. People often see it as the individual’s responsibility to get out of poverty because they are not aware of the obstacles to achieving this. However,those suffering from poverty and being in receipt of benefits are stigmatised, so people are reluctant to speak out.

While the nature of poverty is very different from 50 years ago in the UK and from absolute poverty in developing countries, not having what most people take for granted is what many find difficult. Perhaps the starkest examples are the cases of parents going without or falling into debt so their children can have what others have, or their children being bullied at school for not having the latest trend.This may not be the poverty of material destitution. But if the measure of a human being consists in the accumulation of material possessions to which he or she may claim then , by that token, we are demeaned. And, ultimately, it is in this devaluation of our human worth — not simply in the fact of material inequality but in the meaning this society attaches to it.
The JRF calls for a debate that goes beyond building awareness of poverty. This needs the presentation of narratives exploring the causes of poverty and inequality. Over the decades the answer to the cause of poverty has been staring all those NGOs and charities and researchers in the face . It is capitalism .

Are all reforms doomed to failure and do not really make a difference to workers’ lives? Of course not - there are many examples of ‘successful’ reforms in such fields as education, housing, child employment, conditions of work and social security. But while there has been some ‘successful’ reforms, none of them have ever done more than keep workers and their families in efficient working order and, while reforms have sometimes taken the edge off a problem, they have very rarely managed to remove that problem completely. There have been some marginal improvements, but the social problems that the reformers such as JRF have set out to deal with have generally not been solved - hence the need for an uncompromising socialist party to pursue revolutionary change.
Nobody would deny today that poverty exists in the UK as many JRF reports provide ample evidence of . But does it make sense to argue that because we don't have socialism yet , we should , in the meantime , fight for reforms to at least reduce the worst effects of poverty. This argument has been voiced by so many for so long that `in the meantime' has become forever. The time is long past and too many people have suffered, are suffering, and will continue suffering until we attack the cause itself.

There is one way, and one way only, to abolish poverty, and that is to establish a socialist society in which the tools of production will be commonly owned and administered by the population as a whole in their own interests. In such a world, not only poverty but all the social evils created by the profit system will be abolished.