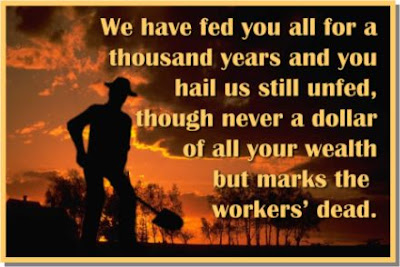 Starvation.net describes how each day , at least 35,615 died from the worst possible death, starvation. Somewhere around 85% of these starvation deaths occur in children 5 years of age or younger. If the next two leading ways the poorest of the poor die, water borne diseases and AIDS, were added we would be approaching a daily body count of 50,000 deaths.One person every 2 seconds needlessly dies from starvation, water borne diseases or AIDS.Farmers around the world grow more than enough food to feed the entire world adequately. Global grain production yielded a record 2.3 billion tons in 2007, up 4% from the year before, yet, billions of people go hungry every day. Since 1961 the world’s cereal output has tripled, while the population has doubled. Stocks are at their lowest level in 30 years. The bottom line is that there is enough food produced in the world to feed the population. The problem is that it doesn’t get to all of those who need it. Less than half of the world’s grain production is directly eaten by people. Most goes into animal feed and, increasingly, biofuels
The global financial crisis appears to be abating. Not so, the hunger crisis. The situation remains grave for the one billion hungry who are growing hungrier every day.That’s one in six people, every day . 80% of the hungry are either farmers or farm labourers, those who produce food.

The food crisis has been misrepresented as basically a production problem, and all the answers amount to the same imperative: produce more food. In capitalist thinking, that means commercial seeds, vast uniform lands for monoculture, lots of chemicals and unfettered trade and investment routes. As a result, a lot of money is being thrown at this recipe to “feed the world”. Throughout the latter part of 2008, donors and UN agencies called incessantly for “more investment in agriculture” as the solution to the food crisis. The French government has just set up, through the African Development Bank, a new private equity fund to invest in African agriculture. The African Development Bank is putting its own capital into private equity funds to spur agribusiness ventures on the continent; the Asian Development Bank is doing the same. The World Bank is increasing its agricultural spending from US$4 billion in 2008 to US$12 billion in 2009–10.At the same time, its commercial arm, the International Finance Corporation, has teamed up with Altima Partners to create a US$75-million fund to invest in agribusiness “to increase food supplies”.

Agricultural policy has completely lost touch with its most basic goal of feeding people. In reality, most of the investment is going into agribusiness development. All these funds and programmes emphasise getting corporate seeds, a handful of Western livestock breeds, and crop chemicals (especially fertilisers) on to the fields, so it is not hard to see who the big winners are. The agricultural input suppliers must be rubbing their hands with glee over these new indirect subsidies. Feeding people is only a distant preoccupation of this investment rush into agriculture. If anything, it is consumers in export markets who are being considered, and a big chunk of the money isn’t even going into food production at all, but into the production of biofuels. Industrial monocultures produce more commodities, not more food. This is good for Cargill and Conagra. It is bad for farmers, the poor and the planet.

Hedge funds and other sources of money are pouring billions of dollars into commodities to escape sliding stock markets and the credit crunch, putting food stocks further out of poor people’s reach. According to some estimates, investment funds now control 50–60% of the wheat traded on the world’s biggest commodity markets. One firm calculates that the amount of speculative money in commodities futures – markets where investors do not buy or sell a physical commodity, like rice or wheat, but merely bet on price movements – has ballooned from US$5 billion in 2000 to US$175 billion to 2007.

It seems that nearly every corporate player in the global food chain is making a killing from the food crisis.Profits at Cargill’s Mosaic Corporation, which controls much of the world’s potash and phosphate supply, more than doubled last year.The world’s largest potash producer, Canada’s Potash Corp, made more than US$1 billion in profit, up more than 70% from 2006.Cargill's biggest profits come from global trading in agricultural commodities, which, together with a few other big traders, it pretty much monopolises. On 14 April 2008, Cargill announced that its profits from commodity trading for the first quarter of 2008 were 86% higher than the same period in 2007.Bunge, another big food trader, saw its profits of the last fiscal quarter of 2007 increase by US$245 million, or 77%, compared with the same period of the previous year. The 2007 profits registered by ADM, the second largest grain trader in the world, rose by 65% to a record US$2.2 billion. Thailand’s Charoen Pokphand Foods, a major player in Asia, is forecasting revenue growth of 237% this year. Nestlé’s global sales grew 7% last year.UK supermarket Tesco reports profits up 12.3% from last year, a record rise. Other major retailers, such as France’s Carrefour and the US’s Wal-Mart, say that food sales are the main factor sustaining their profit increases.Wal-Mart’s Mexican division, Wal-Mex, which handles a third of overall food sales in Mexico, reported an 11% increase in profits for the first quarter of 2008. (At the same time Mexicans are demonstrating in the streets because they can no longer afford to make tortillas.) Monsanto, the world’s largest seed company, reported a 44% increase in overall profits in 2007.DuPont, the second-largest, said that its 2007 profits from seeds increased by 19%, while Syngenta, the top pesticide manufacturer and third-largest company for seeds, saw profits rise 28% in the first quarter of 2008.
Such record profits have nothing to do with any new value that these corporations are producing and they are not one-off windfalls from a sudden shift in supply and demand. Instead, they are a reflection of the extreme power that these middlemen have accrued through the globalisation of the food system. Intimately involved with the shaping of the trade rules that govern today’s food system and tightly in control of markets and the ever more complex financial systems through which global trade operates, these companies are in perfect position to turn food scarcity into immense profits. At the heart of the food crisis , a few megacorporations, investors and speculators can take huge payoffs.


The investments are not so much about producing more food but about changing the way food is produced and who it is produced for. Take China, for instance. Beijing has made the political decision that it wants big agribusiness, not peasants, to supply its growing market for meat and dairy. All levels of government are doing everything possible to lay out a red carpet for food corporations, both Chinese and foreign, from providing subsidies to rewriting land laws and food regulations. Investment in the Chinese dairy and livestock sectors has exploded as a result.A small number of Chinese corporations and foreign joint ventures are emerging as the titans of the industry, often bankrolled by high-rolling foreign private equity firms such as Goldman Sachs, Morgan Stanley and Kohlberg Kravis Roberts (KKR). Meanwhile, the tremendous feed requirements for these farms are supplied by the likes of Cargill and Bunge, who import GM soya from their operations in the Americas. The integration of China into the global agribusiness web is so complete that COFCO, the country’s largest grain company, is rumoured to be negotiating to take over US-based Smithfield Foods, the largest pork producer in the world, of which COFCO already owns 5%. While agribusiness thrives in China, people are suffering, particularly peasants. Millions of peasants will be driven off the land.

University lecturer Alejandro Nadal said : “Today conglomerates like Archer Daniels Midland, Cargill, Bunge, Monsanto and Syngenta have so much control over markets and infrastructure that they can manage stocks, invest in grain futures and manipulate prices on a world scale so that they can obtain huge profits. But neither the WTO or the FAO are interested in tackling this problem.”

We have allowed food to be transformed from something that nourishes people and provides them with secure livelihoods into a commodity for speculation and bargaining. The perverse logic of this system has come to a head. Today it is staring us in the face that this system puts the profits of investors before the food needs of people.