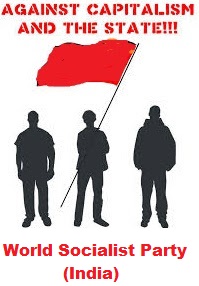 From an article by "N.S." in the Socialist Standard, December 1943.


The Indian scene, in normal times, is a picture of a vast mass of humanity living in the grip of abysmal poverty. Utter destitution resulting in a prolonged death through starvation, or a quicker death through mal-nutritional diseases such as tuberculosis, cholera, and typhoid, is the lot of Indian workers and peasants. What then must be their lot when the price of the food they require for a bare existence soars far and away above their means? What can they do but wait for death to claim them, their bony hands held out imploringly for food, on the pavements of the second largest and one of the “most prosperous” cities in the British Empire! In other parts of the same empire, the granaries of Australia and Canada are full to overflowing with the wheat that would bring succour to those in need. The problem, however, according to Mr. Amery(Secretary for India), speaking in the House of Commons, October 12, 1943, was “entirely one of shipping, and has to be judged in the light of all the other urgent needs of the Allied Nations.” Yet the Allied Nations are producing ships faster than they have ever been produced before in the history of mankind, and the USA is able to boast of a production of 15,000 naval ships of all dimensions in the past three years. Well, might the reader at this point exclaim, “This is madness!”

No, reader, this is not madness – simply another example of the ever-present anarchy in CAPITALISM, the economic system of society that holds the world enslaved.