Humanity is at the Cliff's Edge

Environmentalists occupied five bridges in London on Saturday to highlight government “inaction” on climate change. The Extinction Rebellion group said more than 6,000 people blocked the crossings at Blackfriars, Waterloo, Westminster, Lambeth, and Southwark from around 10am.
“We represent a huge number of concerned citizens – scientists, academics, politicians, teachers, lawyers, students, children, parents, and grandparents,” said organiser Tiana Jacout.
George Monbiot joined the protest at Blackfriars bridge. “Something I have been waiting for, for a very long time is happening,” he said. “People are risking their liberty in defence of the living world in very large numbers. It is only when we are prepared to take such action that people begin to recognise the seriousness of our existential crisis.”
A core feature of capitalism is that it constantly seeks to accrue profit and to carve out new markets.  Firms must compete to survive, while capitalist states must compete in military, economic and political arenas. Accordingly, many measures taken by countries and corporations ostensibly to mitigate climate change are cosmetically designed to placate public opinion. This is not to say that effective regulation of emissions is impossible under capitalism, for instance in 1956 the British government passed the Clean Air Act, which succeeded in much of its goals but today the problem is on a vastly greater scale requiring international regulation.  The lesser evil is a losing strategy. It paves the way for greater evils. Global warming has the ultimate potential to cause such a social collapse on a world scale.  It may be argued that the measures needed to tackle climate change are not somehow fundamentally incompatible with capitalist society. And it is quite easy to imagine a capitalism that lived off the profits based on the production and sale of renewable energy. There is indeed no reason in abstract why capitalism has to be dependent on fossil fuels and industries linked to them. Capitalism can profit from anything it can turn into a commodity – and the history of capitalism is one of showing a remarkable facility for turning just about anything imaginable into commodities. Nevertheless, the people who head the giant corporations, and who embody the logic of capitalism must expand as profit-seeking beasts and will resist with all their power anything which fundamentally threatens the current basis of profit and power. The social facts of capitalism were and are that capitalism is a system which inevitably causes bitter competition among the capitalists. Whether there is a case to be made that capitalism will survive because of its historic ability to adapt to new situations, with new technologies, raw materials or energy resources is an interesting debate. All are asking us to look away from the real target – capitalism. But socialists have proved that capitalism is the greatest threat to the planet’s well-being, and the greatest barrier to attempts to save it. It is capitalist relations of production, distribution and exchange which bring about hunger and poverty. Alternative technologies do not change the structure and effects of capitalism. It is only when we have a socialist society that real choices about energy sources, new technologies can be made.
The struggle over climate change means wresting power and wealth out of the hands of those who have it now and the need for a society run in a fundamentally different and democratic way, one in which not profit but the needs of ordinary people and the future of the planet are at the heart of all action and policy. Such a transformation is what is meant by a revolution, and it is called socialism. Of course, such action needs to be international. The fight to halt climate change also has an inherent logic that goes beyond mere reforms within the existing structures of economic and political power.
We can only begin to address the problem of climate change if we understand the priorities of capitalism that we can see why mainstream politicians have failed to seriously reduce emissions. Capitalism is a barrier to reducing emissions, not simply because of the system’s historic reliance on fossil fuels, but also because of its reliance on market forces. Capitalism is an economic order barely compatible with human sustainability.
A global economy that requires constant expansion of production and increasing exploitation of finite resources and labour would have to be transformed at its roots. We’ll have to produce fundamentally differently and more equitably than we do now. Challenging the regime of capital based as it is on the cheapest and fastest exploitation of labour and nature and the endless expansion of exchange value is at the core of this necessary 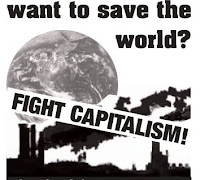 transformation. By concentrating its labour resources economically on the real needs of people socialism would be able to stop vast numbers of wasteful and destructive jobs that are only necessary for a profit system. With the end of economic competition, socialism would not be bound to use the least costly methods of production, many of which are destructive of the environment.