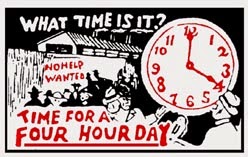 People tend to think the way things are is the way it's always been. Once upon a time, they thought technology would produce more leisure time, but that didn't happen.

"Throughout the 19th century, and well into the 20th, the reduction of work-time was one of the nation's most pressing issues," professor Juliet B. Schor wrote in her seminal 1991 book The Overworked American: The Unexpected Decline of Leisure. "Through the Depression, hours remained a major social preoccupation. Today these debates and conflicts are long forgotten."
"By today, it was estimated that we could have either a 22-hour week, a six-month work-year, or a standard retirement age of 38," Schor wrote, citing a 1958 study and testimony to Congress in 1967.

But that didn't happen. Instead, declining work hours leveled off in the late 1940s even as worker productivity grew rapidly, increasing an average of 3 percent per year 1948-1968. Then, in the 1970s, workers in the US began to work steadily more hours each week while their European counterparts moved in the opposite direction.

Writer David Spencer in The Guardian UK in February wrote, "Why work more? We should be working less for a better quality of life: Our society tolerates long working hours for some and zero hours for others. This doesn't make sense.” He cites practical benefits of working less, from reducing unemployment to increasing the productivity and happiness of workers, and cites a long and varied philosophical history supporting this forgotten goal, including opposing economists John Maynard Keynes and Karl Marx who thought “that under communism work in the 'realm of necessity' could be fulfilling as it would elicit and harness the creativity of workers. [Marx’s son-in-law, Paul Lafargue wrote the seminal work, “The Right to be Lazy”.]

Whatever irksome work remained in realm of necessity could be lessened by the harnessing of technology," Spencer wrote. He also cited Bertrand Russell's 1932 essay, "In Praise of Idleness," in which he reasoned that working a four-hour day would cure many societal ills. "I think that there is far too much work done in the world, that immense harm is caused by the belief that work is virtuous, and that what needs to be preached in modern industrial countries is quite different from what always has been preached," Russell wrote.

Spencer concluded his article by writing, "Ultimately, the reduction in working time is about creating more opportunities for people to realize their potential in all manner of activities including within the work sphere. Working less, in short, is about allowing us to live more."

Carol Zabin — research director for the Center for Labor Research and Education at UC Berkeley, who has studied the relation between jobs and climate change explains the main stumbling block was a political one, rooted in the assumption that American-style capitalism, based on conspicuous consumption, would continue more or less as is. "Politically, reducing economic growth is really, really unviable," noting how that would hurt the working class. "It seems a little utopian when we have a problem we need to address by reducing energy use," Zabin said before finally taking that next logical step: "If we had socialism and central planning, we could shut the whole thing down a notch." Instead, we have capitalism, and she said, "we have a climate problem that is probably not going to be solved anyway."

So we have capitalism and unchecked global warming, or we can have a more sustainable system and socialism. Hmm, which one should we pick? Capitalism has given us great abundance, more than we need and more than we can safely sustain, so let's talk about slowing things down.

"There's a huge amount of work going on in society that nobody wants to do and nobody should do," Author and historian Chris Carlsson said, imagining a world where economic desperation didn't dictate the work we do. "Most of us would be free to do what we want to do, and most of us would do useful things."

Taken from an article on the Common Dreams website