The Truth is Told 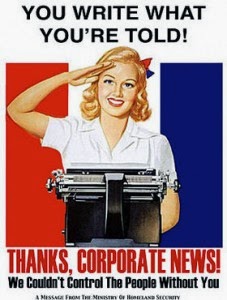 John Humphreys, BBC's Today programme : Have you been censored?

Christina Lamb, OBE, Sunday Times’s foreign correspondent : I believe I have. I mean, every single word that I send back from Afghanistan, as all British media, every photograph, has to first be vetted by the MoD. And I don’t think the British public generally know that.

John Humphreys: But isn’t that fair enough if there is any danger that unwittingly you may give away information that may help the enemy. That’s always happened in war hasn’t it? Assuming you’re the hosts as it were, the guests rather, of the fighting forces.

Christina Lamb: Well, I mean, no other army feels the need to do that. If I’m embedded with the American troops they trust us that they would tell us some things and say, ‘Obviously you can’t write about that.’ And anything else that we would see they don’t ask anything to come back. And for this reason American journalists generally refuse to embed with the British troops because they think that this is just such appalling censorship we have to go through. And I’ve had situations where I’ve had generals, senior generals out there, where I’ve had to do interviews on the basis that the quotes are cleared before they appear. The quotes that come back are not cleared quotes, they are new quotes, things that they’ve decided afterwards…

John Humphreys: So they insert things into your copy?

Asked to respond to Lamb’s complaint of censorship, Major Richard Streatfeild, a former British Army officer who was attached to the 3rd Battalion of the Rifles Regiment in Helmand the retired Major General said: ‘I mean at the end of the day, is censorship and propaganda a part of this?  Of course it is.’

Then, replying to Humphreys’s interjection, he added: ‘This building [the BBC] is all about censorship and propaganda.  It happens every day.  Every news editor is censoring things, and propaganda, and putting their own spin on it, and so forth.’