Fact of the Day 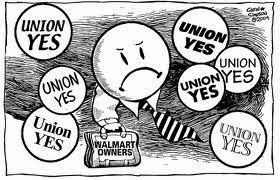 The richest family in the world—the Waltons—received nearly $8 billion in tax breaks last year, according to a new report by Americans for Tax Fairness.

The report stated that in 2013, Walmart received about $6.2 billion in federal taxpayer subsidies because its employee wages are so low. Many employees, in turn, are forced to rely on healthcare, food stamps and other taxpayer-funded programs. The corporation then further evaded $1 billion through tax breaks and loopholes. The Walton family, in addition, avoided about $607 million of taxes on their Walmart dividends.
Posted by ajohnstone at 11:50 pm

Email ThisBlogThis!Share to TwitterShare to FacebookShare to Pinterest
Labels: walmart