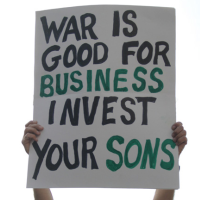 From 2002 until 2011, the profits of the five largest defense contractors (Lockheed Martin, Boeing, Northrop Grumman, General Dynamics and Raytheon) “increased by a whopping 450 percent,” according to Lawrence J. Korb, senior fellow at the Center for American Progress. Ten years ago, the profits of these five companies were $2.4 billion (adjusted for inflation) collectively. By 2011, their profits had soared to $13.4 billion. During the period in which the profits of weapons makers were going up 450%, the U.S. defense budget rose 55%. During the same time frame, the median annual income for American families actually went down almost 6%.