Unions - the law and the struggle 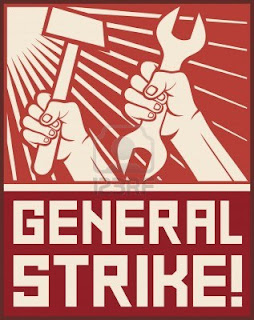 SOYMB found this article to be an insightful and informative on trade unions, the law and the possibility of a future general strike. It is worth while quoting its salient  points extensively.

" ...Unions are far from being marginal organisations dominated by ‘labour barons.’ Although their ranks have undergone a significant thinning in the last thirty years, they still boast over 6 million workers (a quarter of the workforce). Between 2009 and the end of 2011, trade unions were threatened 40 times by employers with injunctions.

Since the 1980s, Unions have been subjected to a plethora of intrusive laws regulating every aspect of their activities, making Britain arguably the most restrictive country in the western world for trade union legislation. One of the proclaimed purposes of these laws was to foster greater democratic accountability, but the actual effect has instead been to furnish a fertile field for the type of legal chicanery, enabling employers to invalidate strikes on the most facile of grounds, whilst preventing unions from acting in accord with their members’ wishes. Trade unions are assailed with petty legal restrictions on their right to strike. The professed purpose of laws introduced in the 1980s and 90s had been to render unions more democratic, but they were in fact being used to prevent unions from realising the democratic wishes of their members. The code of industrial balloting required unions ‘to provide, for example, the exact number of trade union members who were to be balloted, details of their workplaces and the categories of those to be balloted. It also required the union to keep meticulous records of the members’ addresses, jobs and workplaces.’ As a result, ‘Failure to satisfy any of the conditions renders the union open to injunction.’ Britain has repeatedly been reproached for failing to live up to its international obligations and protect the right to strike. The European Committee of Social Rights, which monitors Britain’s compliance with the European Social Charter, has found that the UK is in breach of 10 of 13 obligations. In particular, the Committee thought that the requirement for unions to give notice of a ballot to strike, in addition to giving notice of the strike itself, was ‘excessive.’ Indeed, given that the point of strikes is to exert pressure on employers, this law seems designed to dull their effect by allowing companies time to prepare contingency measures.
In May 2010, cabin crew at British Airways prepared to go on a series of 5 day strikes to protest management’s victimisation of workers who had struck in March. The planned strikes followed a ballot in which an overwhelming majority,  81% to be precise, had voted to reject BA’s offer on pay and conditions. Within a week of the announcement of this fresh wave of industrial action by the union leadership, BA had rushed to the courts to obtain an emergency injunction, citing technical errors which rendered the strike invalid. Instead of contesting the outcome of the vote, BA based its argument on a frivolous detail. Unite had apparently deviated from the letter of the law in not providing a detailed breakdown of the results to its members, failing to notify them that 11 of the ballot papers had been spoilt. Rather than eliciting a bemused look from the presiding judge, BA’s case received a solemn hearing and was upheld in the High Court, anxious that the literal meaning of the law should not be trampled on by wily trade unions. Perversely then, even though 4/5s of cabin crew (on a 71% turnout) had voted to strike, they were to be prevented from doing so on the grounds that the Union had breached their legal rights.

In June 2010 Unite was forced to reballot members at 3 bus operators after these companies refused an Olympic bonus to overworked drivers. A month later, the government threatened to take out a High Court injunction against a strike by border control staff, alleging irregularities relating to 12 of those balloted. With a legal system tilted against them, the scope for workers’ action to uphold their rights has been drastically diminished.

Bob Crow, leader of the RMT Union, which had similarly been forced to reballot its members in April because of minor discrepancies discovered in its voting procedures, summarised the legal hurdles placed in the path of Unions: ‘There’s 1,700 workplaces and over 18,000 workers that work on the Network Rail sites, and we have to at any given moment in time before we ballot, name every single grade and every work location. By the time you finish the audit it’s like the Forth Bridge – you start again because someone else has been promoted, someone else has been sacked, someone dies and so on. It’s a moving feast.’

For MPs the prospect of millions of workers acting in concert to extort concessions from the government is repugnant to their democratic sensibilities, an egregious instance of workers overreaching themselves and intruding onto the sacred ground of national politics. When the TUC voted to look into the practicalities of holding a general strike, it prompted a predictable barrage of enraged accusations that unions, led by labour demagogues and impelled by a grasping mentality, were bent on usurping parliament’s democratic prerogatives and inflicting economic ruin on the country. Conservative MP Dominic Raab, after calling for unions to satisfy a 50% threshold criteria in any vote on the question of a strike (a condition which, if implemented in general elections, would see many current MPs forced to vacate their seats.)

When public sector workers held a one day walk-out in November 2011, in protest at changes to their pension schemes, a BBC poll found that 61% of people thought the action justified. An anti-cuts day of marches organised by the TUC in October saw over 100,000 people participate from across the workforce. Unions, with their high degree of organisation and their mass representation, are one of the few groups capable of resistance.  In 1842, half-a-million labourers downed tools in the first recorded national strike. They struck in support of universal manhood suffrage, eighty years before it was eventually granted. In 1889, it was dockers’ unions in London which inaugurated a new phase in labour history, as previously ignored, unskilled workers joined in the demand for a minimum wage and an 8-hour working day.

Since trade unions derive their effectiveness from workforce solidarity, the ban on undertaking sympathy strikes is a severe impediment to workers defending their interests. Throughout the 1920s, unions were viewed with such alarm largely because of the Triple Alliance formed between coal, rail, and transport workers, whereby an attack on one industry by employers was treated as an attack on all. Under the current system, such a combination would be considered illegal. Moreover, whilst the right of parliament to enact sweeping laws that have manifestly economic implications for millions of people is untrammelled, the right of unions to contest this legislation is absurdly limited on the grounds this would be straying into the realm of ‘politics’. By erecting a fictitious distinction between economics and politics, the law seeks to emasculate unions. Labour lawyers John Hendy and Keith Ewing have pointed out that the UK is signatory to ILO Convention 87, which enshrines the right of unions to engage in political strikes protesting government policy upheld by the European Court of Human Rights. The alternative strike strategy would be attempting to demonstrate a simultaneous ‘trade dispute’ within each of the thousands of workplaces represented by unions in order to justify a strike on a national scale – something which is evidently impractical and would soon become mired in legal difficulties.

One thing, however, is transparent. In attempting to overcome this array of legal barriers, unions cannot rely on the Labour Party. A party that was originally formed under the auspices of the TUC to advance the interests of workers, and still hypocritically receives 80% of its funding from the unions, Labour has always looked with scarce concealed discomfort on the activities of the union movement from which it sprung. New Labour is not an aberration in the party’s political evolution, but simply a more acute manifestation of the contemptuous attitudes that have always underlain the Labour leadership’s dealings with its rank and file. When Ed Balls voices his worry that Tories are ‘itching to provoke a row about strikes’ and the unions are unwittingly playing into their hands, he is merely articulating a long-standing Labour position. Unions are viewed as serviceable only insofar as they assist Labour in getting elected.

The strenuous efforts that politicians devote to maligning unions as ‘special interest’ groups indicates their visceral fear that workers might come to realise the strength at their disposal, and seek to act as a countervailing force. The success or not of a general strike, however, will in the last analysis depend on the strength of the union movement’s resolve to combat government imposed austerity. There are many who are pessimistic, and argue that unions are so reduced in strength by thirty years of attrition that they are simply unable to mount an effective resistance. Moreover, history does not exactly furnish an inspiring record on this count. As critics are quick to gleefully point out, the few occasions on which governments and unions engaged in great trials of strength have often ended in the latter’s defeat.  the unions have often been betrayed by the temporising counsels of their own leaders who, time and again, have recoiled from the looming prospect of victory as though in fear of the revolutionary repercussions a defeat of the government would unleash. Contrary to myth, the 1926 miners strike did not fail because of a dearth of support among the rank and file, but because union leaders unilaterally decided to end it without even an assurance from ministers that they would enter into negotiations. The day after it was officially called off, 100,000 more workers joined in the strike.

History furnishes depressing examples of defeats, but it also shows that the full might of the union movement has never truly been brought to bear against its adversaries. Whilst unions are undoubtedly weaker today than at any point in the past 100 years, the resources they can marshal are nonetheless impressive. The greatest threat to their effectiveness is perhaps neither government nor a hostile press, but their own internal dissensions and doubts."


This blog agrees that to the extent that austerity and the cuts can be mitigated, the only way that would stand any chance of succeeding is by some kind of mass trade union action. But unfortunately the reality is that not enough workers presently have the stomach for this and here is an urgent need to explain and campaign for a future general strike.
Posted by ajohnstone at 2:29 am