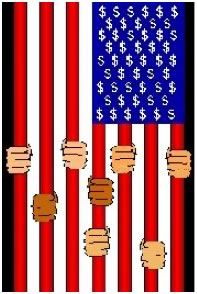 Class war rages. Wealth, power and privilege are prioritized over basic human needs. Corporate giants and America’s super-rich wage war against working Americans. They’re winning. Families struggle to get by and the battle gets ever harder. Many can’t cope and suffer. Some give up entirely. Poverty, unemployment, underemployment, homelessness, hunger, and despair affect them.

Since 1989, inequality grew in 49 of 50 states. Everywhere the top 20% benefitted most. America’s 1% has more wealth than the bottom 95%. The 400 richest families have as much as the bottom 50%. Around 100 million working age Americans are jobless. Education provide no assurances. In 2011, over half the nation’s bachelor degree holders under age 25 were either unemployed or underemployed. 48 million are on food stamps. One in six Americans is on Medicaid. Over half the population needs some form of federal aid. At the same time, median household income is declining. Wages haven’t kept up with inflation. Benefits as a percent of income declined. Most children live in households considered low income or impoverished. Over three-fourths of Americans live from paycheck to paycheck. At the same time, benefit cuts are planned. Draconian policies hammer Indiana residents. Welfare is a four-letter word. It’s restricted to 24 months. Beneficiaries must perform community service. They also must show they’re actively job-searching. Attitudes toward poor people have hardened. A 2008 OECD study found Americans more likely to call them lazy compared to European respondents.

As state "interference" decreases in sectors that may actual benefit the population, such as welfare, social services, pensions, healthcare, education, and so on and while  actual defense from "market discipline" such as the labor unions are dismantled, the large corporations and banks have received direct state protection against "market forces." The most obvious example of this is the post-2008 bank bailouts. Capitalists apparently believe that the elderly and the vulnerable section of the population caused the recession. What else explains their obsession to cut social security benefits? Why else is it that the poorest are bearing the brunt of spending cuts and it is the richest who are getting more affluent every single day? Wall Street blame the loss of industrial competitiveness on government spending on social programs – and on labor’s demand to share in the economy’s rising productivity. The truth is that most of the poor do work, and are getting poorer all the time. Far more people are working part-time, often at several jobs. It has become essential for almost all women to work, yet more and more women are driven out of their modest part-time jobs by the soaring costs of child care. The government talks about unemployment as if it were a chosen way of life rather than the tragedy.

What it comes down to is that for today's wealthy, a dollar paid out in Social Security benefits is a dollar that could be in their pockets. The idea that America has become so impoverished that it can no longer afford the most elementary necessities of its people is a false one. As a nation the United States is richer and more productive than ever. Despite declining industrial employment, manufacturing output is higher now than it has ever been, thanks to the technological revolution. The attacks on the safety net are deliberate efforts to artificially introduce poverty in the midst of plenty.

The truth is often painful but nonetheless it is important that we live in the real world. Ye shall know him by his works. It didn’t take long for Obama to sell out. The "Romney would have been worse" excuse was simply that - a lame, empty excuse. The politics of “compromise,” is another more benign word for targeting the nation’s most vulnerable elderly, sick and politically weak citizens. Obama has quietly sold out senior citizens by gutting the current system that calculates cost-of-living increases for Social Security and other federal entitlement programs. At first, few people would notice Obama’s switch to a so-called “chained consumer price index.” Under the new system, if the price of steak goes up, the government assumes you’ll switch to hamburger—so it doesn’t count as inflation.

The United States ranks first in the world in health care spending per person. As a percent of GDP, America spend $1.2 trillion more than the OECD average but is only 45th in life expectancy. The average American sees a doctor less often than the average Canadian, the average Briton, or the average resident of most industrial democracies. The average life expectancy of white Americans without a high school degree has fallen since 1990 by three years for men and five years for women. Nearly a third (32%) of Americans have put off medical treatment in the past year, saying they were unable to pay for the costs. 19% involved a serious condition. American diabetics suffer twice as many foot amputations as diabetics in Europe because they cannot afford care to prevent foot infections from turning deadly. There are 35 other countries in which a pregnant woman and her baby have a better chance of surviving the pregnancy. There are 15 other nations providing every citizen with lifesaving treatments denied to many unfortunate Americans.  Americans with emphysema are 25 percent more likely to need hospitalization than people in France (the country with the best record). Asthmatics suffer worse: American asthmatics are eight times more likely to need urgent care than those in France. 25 other countries have more doctors per capita, hospital beds per capita and doctor visits yet the United States has the most expensive health care in the world. All these countries spend less. 50 million Americans today lack health insurance. Millions more have coverage inadequate to prevent bankruptcy or financial disaster in the event of a serious illness. The American real health problem is over-treatment, over-billing, and excessive profiteering. The  U.S. Institute of Medicine  reports that the for-profit system wastes $750 billion a year on waste, fraud, and inefficiency.

The entire US health care system is broken. Over-treatment is done to boost profits. Unnecessary procedures are difficult and uncomfortable at best, and at worst they can lead to pain, disability, even death. This over-treatment's been documented in academic studies.

Medicare is also broken. Medicare spending is out of control. Medicare will go bankrupt. Medicare will bankrupt the entire country. Those are the claims by the right-wing media pundits repeated ad nauseum until some of us begin to believe it is true so that it diverts from the real problem. We are regaled daily with stories demonising the poor. We are encouraged to sneer at poverty and hardship. Mitt Romney remarked that it was not his job to worry about the 47 percent of the population likely to vote for Barack Obama, and he explained who they were. They were those “who are dependent upon government, who believe that they are victims, who believe the government has a responsibility to care for them, who believe that they are entitled to health care, to food, to housing, to you-name-it.”  “Entitlement” used to be a positive word which implied that people had a right to certain government benefits. LBJ said to the Republicans about Medicare: “By God, you can’t treat Grandma this way. She’s entitled to it.” Then the word got colored by the psychological meaning it has in “sense of entitlement,” where it implies an unwarranted claim to something. When people on the right talk about the “entitlement society” nowadays, there’s an unspoken “unearned” in the background; it evokes the “culture of dependency” narrative — “entitlement” has become just another word for “moocher”

Medicare is an insurance system for seniors. You turn 65, you get Medicare. Without Medicare, millions of senior citizens wouldn't be able to afford health. insurance.  Medicare is also an insurance program for hospitals. Hospitals can't legally or ethically refuse to treat dying patients. And the simple fact is that most people who are dying are old. Medicare ensures that hospitals get paid for caring for elderly patients who may have no income and no assets. It's hard to collect a bill from a senior citizen in a nursing home. It's even harder to collect a bill from a person who's died. Raising the age for Medicare eligibility won't reduce costs. Excluding 65- and 66-year -olds from Medicare will raise costs by transferring them from cheap public insurance to expensive private insurance - if they get insurance at all. Another bad policy idea is means-testing Medicare. That would mean making rich seniors pay more for their own insurance. In principle, it sounds progressive to make rich people pay more for insurance. But that's not what means-testing really means. What it really means is encouraging richer people to opt out of Medicare and buy private insurance instead.

The average person on Medicare pays roughly $4,600 per year in out-of-pocket medical costs, and that figure can be much higher for those who are severely or chronically ill or who have suffered a serious injury.

Roughly $200 billion in Medicare spending will go to drug company profits in the next 10 years. (averaging the profit margins for large pharmaceutical corporations by projected Medicare drug expenditures.)

Patients with chronic illness in their last two years of life account for about 32% of total Medicare spending. That comes to nearly 2.5 trillion dollars over the next ten years, based on current projects. The elderly are particularly prone to other costly chronic conditions like cancer and diabetes, which can be treated much more effectively - and much less expensively - if they are caught early. Instead, their plan to deny Medicare to people aged 65 and 66 will lead to less early diagnosis and intervention, making the elderly sicker and driving up Medicare's costs. Research has shown that the survival for seniors in America increased by 13 percent when Medicare was introduced in the 1960s. It's reasonable to assume that those survival rates will begin to fall again - and death rates will rise - if benefit cuts are imposed

Marx was right. He called capitalism anarchy.
Posted by ajohnstone at 5:12 am