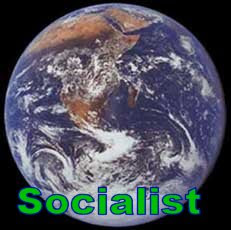 Since its origin in the early 19th century by followers of Robert Owen, the term "socialism" has evolved to mean many different things to many different people, and has been misused by dictatorships to describe their draconian management of capitalism. Recent years have seen the emergence of groups who recognise that by socialism Marx meant a society in which goods would no longer be produced for sale and in which people would no longer work for wages. As an organisation which campaigns exclusively for socialism (as we understand it of course) we are in a position to know how people react to the word and if any words are more over-used and misunderstood today it is “socialism” and "communism" ( we have also maintained the tradition of using them interchangeably). At the present time “socialism” is a dirty word. Hitler, Stalin, Mao and Pol Pot have poisoned our understanding by pasting the word ‘socialism’ onto the very opposite, their barbarous tyrannies. In the course of the 20th century socialism, as a word, came to be transformed from a doctrine and aim associated with the emancipation of the working class into a doctrine and aim associated with the coming to power of nationalist, anti—imperialist elites in the economically less developed parts of the world. It is something that is supposed to have failed in Russia and East Europe and something that the Labour Party is said to have rejected as archaic.The word has become a turn-off associated with bureaucratic control, regimentation and lack of freedom. It is certainly frustrating that the word “socialism” is almost invariably misused today. We are not the only group calling ourselves socialist. Anyone seeking to understand what is wrong with present-day society will come across others, all having some such word in their names as “socialist”, “workers”, “revolutionary” or “communist”. Most of these will be of Leninist or Trotskyist origin and have aims, theories and methods which we do NOT share or advocate. The only thing we have in common is that, unfortunately, they too call themselves socialists. Although of course we don't like people calling themselves "socialist" when in our opinion they're not, that's something to be settled by political debate.

Does the word have any meaning anymore? Actually, we thinks so.

But perhaps the current over-use of the term may bring unexpected results, even encouraging the curious to begin pondering what a truly post-capitalist society could look like. Some positive associations remain, however. We are part of an unbroken tradition going back to those who first used the word and which has retained the original meaning they gave to it despite and in face of Russia and Labour and similar governments. Indeed, as a result of years of misuse the word “socialism” has now virtually come to mean “state capitalism” for most people. Yet why should we surrender the word, especially as Russia has failed and Labour-type parties are now openly pro-capitalist? The field is now open for us to assert the word's original meaning.Who knows but it is may be also quite possible that the growth of the revolutionary movement will breathe new life into the word "socialism", freeing it from the connotations it has been burdened with by those who cannot see beyond capitalism.

But even if the World Socialist Movement comes up with the perfect word to replace “socialism” it would not necessarily bring us any closer to our ultimate goal, for our task as socialists is to convince our fellow workers that capitalism has got to go and that there is in fact an alternative. The task is the same in either case: revealing the limits and contradictions of capitalism and explaining how socialism (or whatever it may one day be called) resolves the problems that are irresolvable as long as that capitalist system prevails. Sadly, capitalism has made image a more important quality than substance but as long as we have to operate within capitalism we will be judged on petty points such as our party colour, just as much as we can be judged on name and our ethos. If we are to change people's stereotypical perception of socialism and socialists—which is difficult enough as it is—then we need to change how people view us rather than reinforcing what they already believe.

One word alone, no matter how well chosen, cannot accomplish all of that. The key point is the concept or content of the future society as the solution to the social problems we face under capitalism, not the word used to indicate that new mode of production. The video we produced "Capitalism - And Other Kids Stuff" manages to give an analysis without using the term socialist or communist.

Socialism's meaning can be said to go back to early religious sects of the ancient world and was taken up by religious dissidents in mediaeval times. Words attributed to John Ball during the Peasants’ Revolt of 1381 capture its meaning very well: “My friends, things cannot go well in England, nor ever, until everything shall be held in common, when there shall be neither vassal nor lord and all distinctions levelled, when lords shall be no more masters than ourselves.”

Some might argue, then, that we should let the reformists and reactionaries twist around the word “socialism” to their heart’s content, while choosing a different term to describe the new society we are aiming to realise – some word less marked by confusion. At times Karl Marx used the word “Association” to indicate the society he envisaged as replacing capitalism. And this term is useful in terms of emphasising how the members of that society will freely enter into production relations with each other to produce social wealth. One obvious drawback, not to be overlooked, is that it would be rather awkward to describe oneself as “Associator” or “Associatist”. However, for many many people the words "socialism", "socialist" hold the sort of vision of an alternative, free society that we stand for. This makes it a strength, and something that will attract people who consider themselves politically aware or socialist to the World Socialism Movement. The title "socialist" connects us to the long tradition of revolutionary ideas and movements of which we are a part in a way that Free Access, for all its merits, probably doesn't.

It may very well happen that a word other than socialism emerges out of the movement for the new money-free society. And it would be absurd in that situation to be a word-fetishist who clings to the word “socialism” as if it were the principle or concept itself. Various other terms have been suggested— "eco-socialism", "world co-operative commonwealth", "world of free access". Others, outside our ranks, have come up with "economic democracy", "self-managed society", "free society". The Zeitgeist Movement, for instance, describes socialism as Resource Based Economy. Some say we shouldn't let ourselves get too hung up about words—any word can become abused and misused; indeed you only need to think how the term "democracy" has been rendered almost meaningless through its use by state and corporate mouthpieces. Descriptions such as socialism, communism, anarchist-communism, Free Access and Common Wealth are all valid, if used meaningfully, for the sort of society we dearly wish to see. There is nothing to stop us using a multitude of words and descriptions for what we stand for in our propaganda (another word that has become distorted!). What's important is that we get our ideas over as effectively as possible. There is no reason why we should constantly shout "Socialism" from the material we produce and distribute, and anyway, much of the time we don't.

But let us suppose that some other word came into use to express the very essence of socialism, its “conceptual concept.” This new word would then be subjected to the very same difficulties. The old word “socialism” would lose its meaning and significance. The new word would become abused in the same manner as the old one. Changing the name would not solve any problem

For the World Socialist Movement the original idea of socialism or communism has not been forgotten, and all through the shifts and turns in the meaning of this word, we have been adding our own, albeit small, voice into shaping its social meaning, so that the idea about what socialism “actually” means isn't forgotten. The idea has been held up above the jumble of letters that make up the word. It remains, though, a word worth fighting for, for its history, for its associations of co-operation and mutuality, and because it describes something positive, a situation to be aimed for – a just state of society. Socialism remains a good word to put our arguments across. Because of our different understanding of it, people are surprised by our answers and perspectives, and become genuinely interested, broken out of the stale old left-wing right-wing arguments. And just as words such as "queer" have been wrested from negative senses to have positive meanings, thus can socialism , with all its history and associations be wrested back as well.

It is our ideas, our practices, and our values, that makes us the Socialist Party, not simply the word "socialist" . It wouldn't matter what we call ourselves, as our ideas grow a word would be found to express them, in their full meaning. Since we think that, historically, that word already exists, we choose to use it. The important thing would seem to be that socialists take an open-minded and non-dogmatic approach to the way we present and develop our ideas.
Posted by ajohnstone at 3:03 am

Email ThisBlogThis!Share to TwitterShare to FacebookShare to Pinterest
Labels: Socialism