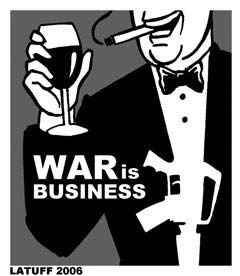 Poppies are sold, a festival of remembrance held and televised, boy-scouts, girl-guides, sea, air and army cadets, serving and ex-soldiers march down to the local war memorial for the yearly ritual, the customary observance and practice. In a thousand places, before a thousand monuments, people stand, hats in hand, heads bowed.

And what of the politicians (many submitting expense claims for the cost of a wreath), the churchmen and the military men, who stand before the people and address them? Are they saying that the millions who died in war need not have died, that there can never be need for war? Are they saying that this periodic carnage has never served a worthy end, that the lives and work of men have been wantonly destroyed to serve only the propertied interests of a parasite class, that wars will go on and on, adding to terror and anguish and piling up mountains of reddened rubble so long as propertied interests dominate society? Or are they talking in deep emotion about heroic deeds, eternal glory, the triumph of right? Are they glossing over the blood and guts of tortured humanity, transforming its darkest moments into its finest hour, finding in callous greed the purest of motives?

Which brings SOYMB to this letter:

"Apart from accrediting the term 'hero' to the principal character in a play or film, our dictionary, more meaningfully, defines the word as `someone greatly admired for exceptional qualities or achievements'. We would take it that the latter definition includes acts of bravery and derring-do; qualities which, in themselves, are not necessarily related to wisdom or moral purpose.

It is these latter qualities, however, which are ascribed by the media to those making up the remembrance occasions and the abundance of ex-military personnel remembering from some angle or proximity the awful agonies of capitalism's ongoing brutal conflicts.

One can understand and sympathise with the pain felt by loved ones of the victims of any 'side' in these obscene conflicts but martial music, pseudo-military style parading, foot stamping, fore-lock touching and command bellowing is a recognition, even a glorification, of war.

Surely fallen comrades would be more gloriously remembered at activities where the political and economic causes of war were exposed and resolutions made to discourage future generations from partaking in it. Perhaps old enemies could mingle and resolve that if their masters needed blood-letting that blood should not be that of the working class.

We find it particularly difficult to understand the attitude of clerics to the business of war - and it is a business. God, in his various denominational identities, admonished his followers `Thou shalt not kill'. It seems the churches concede to the to the State the right to suspend that commandment when 'killing' is pre-fixed by the word 'mass' - as in war."

The idea of the poppy came the military surgeon John McCrae and his poem after the death of his friend Lieutenant Alexis Helmer, But it's a pro-war propaganda poem for revenge as the last verse demonstrates , not remorse for the waste of loss of life .

Take up our quarrel with the foe:
To you from failing hands we throw
The torch; be yours to hold it high.
If ye break faith with us who die
We shall not sleep, though poppies grow
In Flanders fields.

For SOYMB this is a day to remember and learn from the things remembered and to look back with horror, and perhaps look forward with hope . But for the capitalists it is a day that reassures them and which rekindles the martial spirit, to preserve the willingness of the working class to sacrifice their blood all over again. It is a day of sham, hypocrisy and lies, that flaunts its brutality in pomp, colour and oratory, barren of remorse, mercy and hope.

Email ThisBlogThis!Share to TwitterShare to FacebookShare to Pinterest
Labels: Day of Remembrance, war

Bent double, like old beggars under sacks,
Knock-kneed, coughing like hags, we cursed through sludge,
Till on the haunting flares we turned our backs
And towards our distant rest began to trudge.
Men marched asleep. Many had lost their boots
But limped on, blood-shod. All went lame; all blind;
Drunk with fatigue; deaf even to the hoots
Of disappointed shells that dropped behind.

GAS! Gas! Quick, boys!-- An ecstasy of fumbling,
Fitting the clumsy helmets just in time;
But someone still was yelling out and stumbling
And floundering like a man in fire or lime.--
Dim, through the misty panes and thick green light
As under a green sea, I saw him drowning.

In all my dreams, before my helpless sight,
He plunges at me, guttering, choking, drowning.

If in some smothering dreams you too could pace
Behind the wagon that we flung him in,
And watch the white eyes writhing in his face,
His hanging face, like a devil's sick of sin;
If you could hear, at every jolt, the blood
Come gargling from the froth-corrupted lungs,
Obscene as cancer, bitter as the cud
Of vile, incurable sores on innocent tongues,--
My friend, you would not tell with such high zest
To children ardent for some desperate glory,
The old Lie: Dulce et decorum est
Pro patria mori.