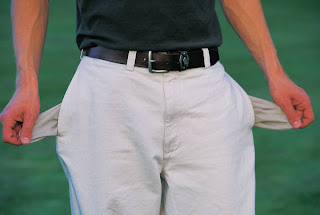 In The Independent SOYMB reads that a survey shows that fewer than half of Britain's 11 million low to middle-income earners have any money left over at the end of the month.

Research by Ipsos Mori for the Resolution Foundation think tank found that 48 per cent of people in low to middle-income households – defined as having a gross income of between £12,000 and £48,000 a year – have any cash left over at the end of each month.(compared with 66 per cent among higher-income households.)

One in four of people surveyed expect their financial position to get worse over the next year.

Only 41 per cent of those in work said that they felt secure in their jobs and among part-timer workers, the figure dropped to 33 per cent.

Gavin Kelly, RF's chief executive, said: "Working people in low to middle-income households continue to be squeezed from all angles. Everyone is saying that households need to save more and run down their debt – but this new poll shows just how hard that will be. Families simply cannot afford to put money aside."

Posted by ajohnstone at 5:55 am