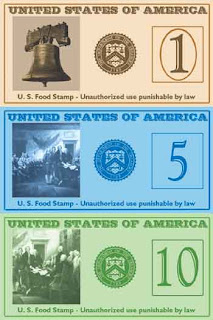 The most recent numbers from the U.S. Department of Agriculture (USDA) shows the country now has a record-breaking number of people receiving food stamp benefits. In May, 45.8 million people had to use food stamps. That is equal to 15 percent of the entire American population and a 1.1. million increase from the previous month.Texas, Florida, California and New York are where the most benefits are being used. There are more than 3 million in each state receiving food stamps.

The US unemployment rate has dropped slightly - from 9.2 per cent to 9.1, according to the country's labour department. The official rate in the state of Texas, however, is lower, at 8.2 per cent, but that is because many Texans are taking jobs with less pay than normally tolerated, and with no benefits. Almost one million Texans are jobless and half a million are working only part time.

According to “The State of America’s Children 2011,” a report issued last month by the Children’s Defense Fund, the impact of the recession on children’s well-being has been catastrophic. Here is just a handful of the findings:

• The number of children living in poverty has increased by four million since 2000, and the number of children who fell into poverty between 2008 and 2009 was the largest single-year increase ever recorded.
• The number of homeless children in public schools increased 41 percent between the 2006-7 and 2008-9 school years.
• In 2009, an average of 15.6 million children received food stamps monthly, a 65 percent increase over 10 years.
• A majority of children in all racial groups and 79 percent or more of black and Hispanic children in public schools cannot read or do math at grade level in the fourth, eighth or 12th grades.
• The annual cost of center-based child care for a 4-year-old is more than the annual in-state tuition at a public four-year college in 33 states and the District of Columbia.

Yet 1470 of the 235,413 US citizens who earned $1 million or more in 2009 paid no taxes. The richest 1% of Americans earn nearly a quarter of the country's income and control an astonishing 40 per cent of its wealth.

Posted by ajohnstone at 4:26 am