Ten benefits of not having money 5

Ten benefits of not having money 5.


Socialist society will have no need for money. This will profoundly affect all aspects of life.

Currently the growing, processing and distribution of food is largely dominated by transnational corporations solely in the pursuit of profit. The consumer appears to have a huge choice of goods and numerous decisions to make at each aisle of the supermarket but often the choices are superficial, not actually the choices being sought. For instance, notice the difficulty of buying a processed food which doesn't contain soya. The soya has probably been genetically modified and the labelling could be unhelpful. The choice becomes buy in ignorance or acceptance, or do without.


It's well known that products are laced with added sugar, salt, monosodium glutamate etc. to create a certain dependency and craving for more. Last year's problems of melamine-laced pet foods which caused animal deaths in the importing countries were followed this year by melamine-laced milk products causing infant deaths and multiple illnesses in China, spreading fear to importing countries. There can be only one reason for food to be contaminated deliberately (apart from a mass assassination attempt or the desire to spread fear among the population) and that is in the pursuit of greater profit.


Africa, a net exporter of food until the post-colonial days of the 1960s, became a victim again, indebted to the World Bank and IMF. Recipient of highly subsidised dumping of food from rich countries (US and Europe) the result has been that the countries there have to grow cash crops for export in order to pay off some of the growing debt creating food shortages for the domestic population, many of whom had been forced off ancestral lands (for the growing of cash crops) and who were then without the means of subsistence. There have been a number of studies which reveal there is no problem feeding a world population considerably larger than today's. There is an enormous wastage of food in the rich world. The major problem for the hungry in the poorest countries is lack of cash. 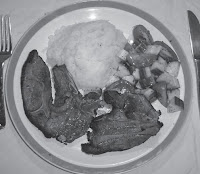 Food, if regarded simply as fuel for the body, should be clean – free from contaminants, chemicals and the like; fresh – the more local the better; and nutritious. Free food for all would come with the bonus of knowing there would no longer be any incentive to adulterate ingredients. The question of “FAIR TRADE” wouldn't arise as all along the line farmers, producers, pickers, packers and distributors would have the same motivation to provide good clean food knowing they have the same access as the consumers. This has to be a win-win situation. Another winner in this scenario would be the environment.

JANET SURMAN
Posted by Matthew Culbert at 2:52 am