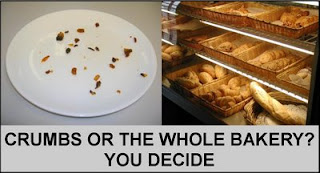 Further to our earlier blog Dying of Hunger , we now read that a coalition from 29 countries of 183 faith, farm, food, hunger, and international development groups have appealed Barack Obama to protect hundreds of millions of people from the global food crisis by preventing price speculation in commodity markets.
In a statement they report that "A significant part of last year's food price fluctuations were the result of excessive speculation in the commodities markets by the very hedge funds and investment banks that helped create the current economic meltdown." And that the 2008 food price volatility "could have been stopped with sensible rules that, if enforced, would have staved off the malnutrition and starvation that was caused by excessive gambling of food prices. Important reforms are needed now to prevent mega-investors from viewing the futures market like a casino where they can gamble on hunger...We cannot allow our basic food needs to be subject to the whims of investors."
The United Nations Food and Agriculture Organization estimated that 200 million additional people in the developing world faced malnutrition because of surging food prices in 2008.
Those well-meaning organisations may beseech President Obama for legislative change and even if he is favourable to such reform , it is nevertheless a forlorn hope that the capitalist system will change its reason for existing - to produce and maximise profit . The idea that this can be achieved within capitalism denies all experience. It substitutes blind optimism for sound analysis and real solutions.Those well-intentioned groups and individuals believe the problem of hunger, in a world of abundance, can be solved by reforming that system and by coaxing the capitalist class into mending their ways. A thousand promises by the defenders of capitalism have proved otherwise, and always will , until we end their system.
The remedy involves abolishing the money system, freeing production from the artificial constraints of profit and establishing a world of free access for the benefit of all . It is only by working with the relationships of common ownership, democratic control and production solely for needs that it would be possible.
Posted by ajohnstone at 5:17 am