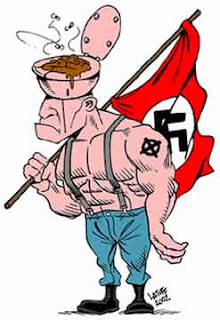 The number of hate and anti-government groups in the United States continues to rise last year, fueled by racial tensions, conspiracy theories and anger over economic inequality, according to a report by the Southern Poverty Law Center.

The fastest growth came from the so-called Patriot movement, whose adherents view the federal government as their enemy. The number of Patriot groups, a largely rural phenomenon sometimes referred to as the militia movement, increased to 1,274 groups in 2011 from 824 in 2010.

The number of those organizations has swelled in recent years since the economy slumped into recession and Democratic President Barack Obama, the country's first black president, was elected in 2008, said the law center, which has tracked extremist groups for three decades. A backlash against federal bail outs of the bank and auto industries, and discredited allegations that Obama was not born in the United States and therefore disqualified to be president, provided believers with the rationale to join such groups, according to the report.

Mark Potok, a senior fellow at the law center, said that Obama's candidacy and election has fueled the growth in groups that believe the federal government will "impose martial law ... confiscate guns ... open concentration camps run by FEMA ... and force the U.S. to become a socialist state. It's a conspiracy-driven movement,"

August Kreis, a longtime neo-Nazi who in January stepped down as leader of an Aryan Nations faction after being convicted of fraud related to his veteran’s benefits, told the Intelligence Report that it was all about income inequality. “The worse the economy gets, the more the groups are going to grow,” he said. “White people are arming themselves — and black people, too. I believe eventually it’s going to come down to civil war. It’s going to be an economic war, the rich versus the poor. We’re being divided along economic lines.”

It is difficult to gauge how many Americans are members of hate groups, but estimated the number was between 200,000 and 300,000 people. The center also estimated that some 300,000 Americans were part of the so-called "sovereign citizens" movement who flout most laws, do not pay federal taxes and even refuse to obtain driver's licenses.

Nor should people in the UK be complacent. A study found that 40% of BNP supporters believe armed conflict between ethnic, racial or religious groups could be justifiable.

The study, From Voting to Violence? Rightwing Extremists in Modern Britain, by Matthew Goodwin, of the University of Nottingham, and Jocelyn Evans, of Salford University found that many endorsed violence, with a "hostile inner core" apparently willing to plan for and prepare for attacks. The authors found that almost half of the BNP supporters in their sample thought "preparing for conflict between different groups is always or sometimes justifiable" and two-fifths considered armed conflict to be "always or sometimes" justifiable.

The authors say the study represents a stark warning about the potential threat posed by far-right extremists in the UK. "..the BNP members in our sample appear to view themselves as a core vanguard who are preparing for a forthcoming conflict in a way that the party's more passive supporters are not."

"What we have got here is a group of people who self-identify as supporters of the far right and who are, to quite a large extent, backing ideas about preparing for violence and appear to view violence as a justifiable political strategy," said Goodwin who said his report's findings should also be seen in light of the 17 people affiliated to the far right who have been imprisoned in the UK in recent years for terrorism offences. "When you go through the transcripts of those cases what they often emphasise is this notion of impending race war, the impending clash of civilisations that meant they needed to stockpile explosives and plan attacks to defend their group from a perceived threat. It is that apocalyptic, almost survivalist notion that goes with far right ideology that we have begun to explore..."
Posted by ajohnstone at 6:47 am