Carrying a torch for Nazism 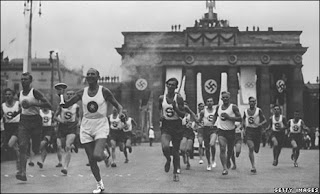 Details of the route the London 2012 Olympic torch relay will take around the UK has been set out. As has the names of the majority of the 8,000 people who will carry the flame on its 8,000 mile journey .

In contrast to the Olympic flame proper, the torch relay of modern times had no ancient precedent and was introduced at the Nazi -Party hosted 1936 Berlin Olympics.

The idea of the torch relay was organised under the guidance of Joseph Goebbels. Krupp armaments company produced the torches . Movie-maker Leni Riefenstahl later staged the torch relay for the 1938 film Olympia. The film was part of the Nazi propaganda machine’s attempt to add myth and mystique to Adolf Hitler’s regime. Hitler saw the link with the ancient Games as the perfect way to illustrate his belief that classical Greece was an Aryan forerunner of the modern German Reich. As a suitably Aryan-looking German athlete carried the torch into the stadium in Berlin the BBC radio commentator was deeply impressed: "He's a fair young man in white shorts, he's beautifully made, a very fine sight as an athlete."

In 1936 the torch made its way from Greece to Berlin through countries in south-eastern and central Europe where the Nazis were especially keen to enhance their influence. The flame's arrival in Vienna prompted major pro-Nazi demonstrations, helping pave the way for the annexation of Austria, in 1938.

Carl Diem, the originator of idea of the torch relay, ended the war as fanatical military commander at the Olympic stadium in Berlin, refusing to accept that the Third Reich was over. Reinhard Appel, a teenage member of the Hitler Youth based at the stadium, described a speech made by Diem in 1945 as the Red Army closed in. "He kept referring to Sparta - the history of how the Spartans had not feared dying for their country. He demanded that we be heroes." Hundreds of the youngsters were killed in a futile attempt to defend the stadium. Diem survived, and reinvented himself after the war as an academic specialising in the philosophy of sport.

For two weeks in August 1936, Adolf Hitler's Nazi dictatorship camouflaged its racist, militaristic character while hosting the Olympics. Soft-pedaling its anti-semitic agenda, the regime exploited the Games to bedazzle many foreign spectators and journalists with an image of a peaceful, tolerant Germany. Germany skillfully promoted the Olympics with colorful posters and magazine spreads. The propaganda purpose stays the same, only the message changes!
Posted by ajohnstone at 8:42 am