Tax cuts are for the rich

According to Americans for Tax Fairness, a coalition of organizations which advocates for progressive tax reform, the numbers in their new analysis reveal that the public relations campaign touting the idea that corporations would be sharing "a big slice of their huge Trump tax cuts with their workers through bonuses and wage hikes is mostly hype." Less than ten percent of the nation's wealthiest and most-profitable companies have shared any of the financial benefits they received from a massive corporate tax cut provided by Trump. only 46 of the Fortune 500—just 9 percent overall—have announced any plans to share their tax-cut wealth with workers.

"Not only are few big corporations sharing any portion of their tax-cut bounty," the group stated, "but the amounts going to workers pale when compared to how much the companies are getting in tax cuts and to how much they’re returning to shareholders through stock buybacks and dividends (where those figures are available).

Among Fortune 100 corporations:
Among Fortune 500 corporations:
"The idea that tax cuts for corporations and millionaires will trickle down to workers has been debunked over and over," said ATF executive director Frank Clemente. "Even many CEOs have acknowledged that the benefits will flow to shareholders, not to employees. " 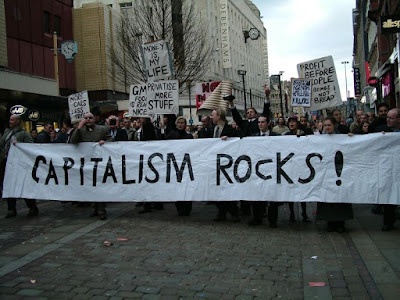 Posted by ajohnstone at 9:54 pm