Under capitalism people are the losers 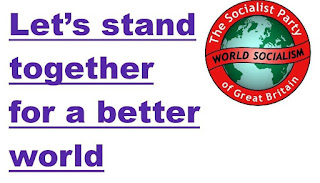 The Socialist Party has no illusions about the democratic credentials of the politicians of the Left, the Right or the Centre. What the capitalist class, and the political parties that serve that class, call democracy is a contrived form of consensus in which the political parties conspire to ensure that the maximum number of people accept a system of law which guarantees a minority class in society the legal right to own and control the means of life of the great majority. To achieve and maintain that system of Law – and the Order that ensures the right of that minority to exploit and impoverish the majority – capitalism must have political control of the state machine. A vital part of the process that maintains the illusion of democratic choice is the power to confine political knowledge – and, thus, political options – to those parties whose policies are firmly rooted in an acceptance of capitalism. When it comes to elections, the choice is governed by information and knowledge and, since the allegedly democratic parties have ensured that the public have information about, and knowledge of, the present system and the politicians offering themselves to run this system capitalism goes unchallenged. Like Henry Ford's Model T, which was available in any colour providing it was black, current “democratic” practice is to allow us the widest possible choice as long as it is capitalism. The truth is that the democratic machinery is available to all shades of opinion – if they can afford it. Even then, a party stating a case for an alternative way of running society would be disadvantaged, for capitalist politics, its parties and its media, are not based on rational examination of ideas but on the performance of media celebrities.

Politics today accepts the status quo. It accepts capitalism and seeks merely to work within it. Politics becomes a question of choosing the best capitalism-management team from amongst competing groups of politicians. Politics becomes a profession. You vote for a politician to do something for you and you reward them for the service by voting for them. Most people’s only involvement in politics is, literally, once every few years when they go and put an X on a ballot paper. Then they go home and let the person elected get on with the job. People’s participation in politics becomes simply giving a thumbs up or a thumbs down to the outgoing administration. If they don’t mind what they’ve done, they vote them in again. If they’re not happy then they vote in some other lot. Politics becomes a spectacle in which people are just passive spectators watching the goings-on of politicians. The media - especially TV - play to this, presenting politics in between elections as a soap. But it is not even a good spectacle. It’s boring and the actors are all second and third rate. It doesn’t work either. Nothing seems to change and nothing does change. The same old problems continue, with the professional politicians only being able to tinker about and patch things up a little. The end result is that politics in seen as completely boring and that people don’t want to know about it, except in the few weeks before a general election. People know that voting doesn’t change anything and that the only power they have is to vote the Ins Out (or In again) or vote the Outs In; to change the management team, while their day-to-day lives are unaffected and unchanged. Elections have always been a ritual to stabilise a regime not to change it. Some regimes prefer other means or better said to dispense with the cosmetics. No wonder people become apathetic and cynical.

Can things change? Yes, they could but it’s not going to be through conventional politics, only through a quite different kind of politics.  A politics which rejects and aims to change the status quo. A politics which involves people participating and not leaving things up to others to do something for them. Besides involving people surrendering their power to act to others, conventional politics is based on the illusion that what happens depends on what the politicians in power do; that politicians really do control things; that politics is in the driving seat. But this isn’t the case. It is the way society is organised to produce things that is the main factor determining the way we live and what happens - and what doesn’t happen. In other words, what is important is the sort of social and economic system we live under, not which party of professional politicians controls the government. That’s why changing governments changes nothing. The present system - capitalism, with its class privilege, production for profit and coercive state machine - is by nature incapable of being made to serve the common good.

When more and more people realise this they will begin organising for it, in the places where they work, in the neighbourhoods where they live, in the various clubs and associations they are members of, but, above all, they will need to organise politically. Who says “politically” also says “political party”. So we are talking about a “socialist party”.

Unfortunately so associated has the word “party” come to be with conventional politics that many people imagine that we, too, are proposing just another organisation of political leaders for people to follow; that we’re saying “vote for us and we’ll bring in socialism for you”. But we’re not. By “socialist party” we mean a party of people who want socialism, people organised democratically to win control of political power for socialism. Obviously, a mass socialist party like this does not yet exist, but it is our view that, for socialism to be established, it should. Without having any delusions of grandeur, we try to organise ourselves today in our small party in the same way we think that a mass socialist party should organise itself: without leaders and with major decisions being made democratically either by a referendum of the whole membership or by a conference of mandated delegates and other decisions by elected committees. The “socialist party” would be a mass movement of people who wanted socialism, not a party of professional politicians or a party of professional revolutionaries or even of people who wanted to serve the people.

The same goes for participation in elections since a mass socialist party would contest elections. Here too, we try to anticipate how we think a mass socialist party when it emerges, should behave. Its candidates should not seek to be leaders, separate from those who vote for them but should be standing as delegates to be mandated by those who want socialism. This is why when we stand in elections all we advocate is socialism. Not reforms of capitalism, not promises to do things for people, as the conventional parties do.

If you want a better world, you are going to have to bring it about yourselves. That’s our basic message. It’s no good following leaders, whether professional politicians or professional revolutionaries. In fact, following anybody (not even us) won’t get you anywhere. The only way is to carry out a do-it-yourself revolution on a completely democratic basis. Democratic in the sense that that’s what the majority want. And democratic in the sense that that majority, rather than following leaders, organises itself on the basis of mandated and recallable delegates carrying out decisions reached after a full and free discussion and vote. That’s what politics can be, and should be. And has to be if things are ever to change.

Unlike MPs elected to service capitalism, socialist delegates will not be observing parliament's meaningless rituals. When there is a majority of socialist delegates there will be no Queen's Speech, no White Papers nor any of the other shams that pass for democracy today. Just the historic announcement that capitalism has been abolished and that, henceforth, real participative democracy in the administration of social affairs, at local, regional and world levels, will obtain.