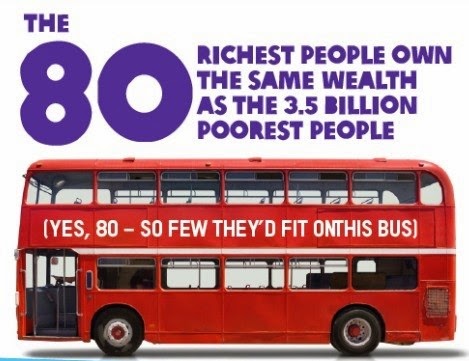 Why can’t we have a society that works? Why can’t everyone have good food to eat, have free access to health and medical services. Why can’t all youngsters get the education they desire, and all seniors receive the dignity they deserve.  The answer is that we live under CAPITALISM – a global system based on the exploitation of the majority by the minority. And the solution to all these problems is SOCIALISM – a global system based on mass democracy. We firmly believe that a socialist world is not only possible but, most importantly, it is necessary and achievable. The fight for socialism is more urgent today than ever.

There is a belief that the poor have a notion that “I really don’t have to work. I don’t really want to do this. I think I’d rather just sit around.” In reality, a large and growing share of the nation’s poor work full time — sometimes sixty or more hours a week – yet still don’t earn enough to lift themselves and their families out of poverty. The ranks of the working poor are growing because wages at the bottom have dropped, adjusted for inflation. With increasing numbers of Americans taking low-paying jobs in retail sales, restaurants, hotels, hospitals, childcare, elder care, and other personal services, the pay of the bottom fifth is falling closer to the minimum wage. At the same time, the real value of the federal minimum wage is lower today than it was a quarter century ago. In addition, most recipients of public assistance must now work in order to qualify. Is education the solution to inequality that it’s often presented as? A paper from the Hamilton Project, co-authored by former Treasury Secretary and former Harvard University president Lawrence Summers, argues that the answer is no. So much income is concentrated among America’s richest citizens that a modest increase in earnings at the bottom end of the income distribution will barely make a dent in overall inequality. In a simulation in which one out of every ten American men between the ages of 25 and 64 without a bachelor’s degree suddenly graduated from college the results show a surge in the earnings but inequality barely budged.

Increased educational attainment across lower-income brackets would indeed result in higher income and more economic security for vulnerable groups, the paper finds. But so much income is concentrated among America’s richest citizens that a modest increase in earnings at the bottom end of the income distribution will barely make a dent in overall inequality.

It’s also commonly believed that the rich deserve their wealth because they work harder than others. For the very rich, the majority of their income is not from wages they work for, but rather capital gains and other investment income. Much of the CEO’s pay comes in the form of share-options. In reality, a large and growing portion of the super-rich have never broken a sweat. Their wealth has been handed to them. Six of today’s ten wealthiest Americans are heirs to prominent fortunes. It's so horrible and we've already been down this road before with Rockefeller, Carnegie, Morgan, Ford, Astor, and all the others that brought despair to the people. The wealthy are busily transferring that wealth to their children and grand-children. A study from the Boston College Center on Wealth and Philanthropy projects a total of $59 trillion passed down to heirs between 2007 and 2061 in America alone. Leona Helmsley left $13 million to her dog!

It is not just inherited wealth. People like Steve Jobs or Bill Gates, who many people consider actual "captains of industry" are just the same worthless thieves also who contributed basically nothing to what really made them successful. In the very best case, like with Jobs, they added a sprinkle of design or marketing or some other superficial gimmick. And that is actually a worthwhile contribution compared to the rest of them!

The average American believes that the richest fifth own 59% of the wealth and that the bottom 40% own 9%. The reality is strikingly different. The top 20% of US households own more than 84% of the wealth, and the bottom 40% combine for a paltry 0.3%. The Walton family, for example, has more wealth than 42% of American families combined. In another study published last year, Norton and Sorapop Kiatpongsan used a similar approach to assess perceptions of income inequality. The average American estimated that the CEO-to-worker pay-ratio was 30-to-1. The reality? 354-to-1. Researchers found Americans overestimate the amount of upward social mobility that exists in society. They asked people to guess the chance that someone born to a family in the poorest 20% ends up as an adult in the richer quintiles. Sure enough, people think that moving up is significantly more likely than it is in reality. 60% believe that most people can make it if they’re willing to work hard. The United States is now the most unequal of all Western nations. To make matters worse, America has considerably less social mobility than Canada and Europe.

Just five percent of Americans think that inequality is a major problem in need of attention. Americans widely believe that success is due to individual talent and effort. Unions provided much of the organizational and financial support that helped deliver victories to millions of working Americans. Yet none of these wins translate directly into new dues-paying members. Ongoing attacks by anti-union forces have crippled unions’ organizational models in what were labor strongholds, including Wisconsin and Michigan. Many of these attacks have taken dead aim at what remains of labor’s real strength: its public sector membership base. Abetted by recent court decisions, efforts to defund and defang public sector unions are growing in size and sophistication by right wing policymakers and lobbying groups. Curiously, despite serving as a primary source of votes and finances for the Democratic Party for much of the 20th Century, labour finds itself with few political allies.

Working people need to realise that the system was never meant to work for them. If people want a chance, simply just a chance for a just and equitable society they'll need to revolt against the plutocrats. So we need to start getting people to accept socialism. That's an important step to fixing this problem. Capitalism was built on the institutionalised theft of surplus value of labour and savage inequality for the profits of a ruling class of the few. And this is not new. It is the normal workings of capitalism in all its glory. Inequality is a result of capitalism, which is by its very nature exploitative through wage labour…thus driving class and wealth inequality

The rich are parasites on the working class--and we define "working class" in the broadest sense: those that go to work to produce goods and services that people need and want. Our definition includes engineers, designers, teachers, doctors, lawyers--as well as factory hands. The wealthy extract money through their ownership of capital which they use primarily to speculate on the stock market, the commodities market, real estate, the currency market, and god knows what else. We are bombarded with the propaganda that makes exploitation entirely acceptable. A part of the solution we need to build a one unified socialist movement across the diverse movements. A world socialist project is by no means impossible but we need to give people hope that there is a purpose to the mobilization.

Not sure why you supplied the link to a charity foundation.

Surely you are not suggesting that the economic system should be based upon the philanthropic predilections of the rich which of course would confirm we live in a plutocracy ... that civil society is at the direction and the personal whims of the wealthy

Not sure why you supplied the link to a charity foundation.

Surely you are not suggesting that the economic system should be based upon the philanthropic predilections of the rich which of course would confirm we live in a plutocracy ... that civil society is at the direction and the personal whims of the wealthy