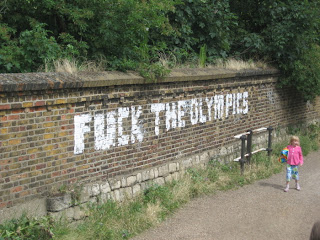 Len McCluskey, general secretary of Unite, Britain's biggest union made it clear that 2012 could see a dramatic escalation in the battle between trade unions and the Con-Dem coalition.
"The attacks that are being launched on public sector workers at the moment are so deep and ideological that the idea the world should arrive in London and have these wonderful Olympic Games as though everything is nice and rosy in the garden is unthinkable. Our very way of life is being attacked. By then this crazy health and social care bill may have been passed, so we are looking at the privatisation of our National Health Service. I believe the unions, and the general community, have got every right to be out protesting. If there is a protest, then the purpose of protest is to bring your grievances to the attention of as many people as possible."

Some Conservatives have already been arguing that the government should tighten the strike laws.One idea not wholly ruled out by ministers, is for unions to be prohibited from striking unless 50% of their members back strike action – not just 50% of those voting.

McCluskey signalled that unions would refuse to comply with such a law, even if that meant calling strikes illegally. "If [ministers] make these attacks against us, trying to limit the type of strike action … if they push us outside the law, they are going to have to live with the consequences of that," he said. "Because if we need to break the law in order to defend what are our basic human rights – right of association – then we will do that."
Posted by ajohnstone at 2:28 am

Glad to see the unions stepping things up a gear, while they can and indeed must defend themselves against the onslaught of capital I hope that one day workers will unite for the final assault: the abolition of the wages system!