A Feast of Nationalism and a Festival of Freaks 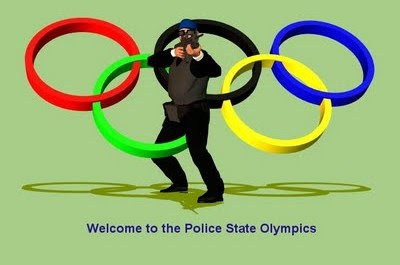 Army reserves are being mobilised for the Olympic Games.

Territorial Army and Royal Navy, Royal Air Force and Royal Marine reservists are being called up under the terms of the 1996 Reserve Forces Act.

In December ministers almost doubled the security budget for the Games to £553m.


"The modern Olympics have always been a political football – nothing more and nothing less – endlessly traduced and manipulated by the regimes that ‘host’ them. This one is no different, presenting a fine opportunity for the British security state apparatus and its private security firm hangers-on to deploy the mass-suppression and urban paranoiac technologies in the service of export earning. Some peace, some freedom." Will Self

In the 19th century the idea of worldwide peace became part and parcel of general humanistic thinking. Peace organizations were founded in many countries. Pierre de Coubertin had the idea of renewing the ancient Olympic Games, which duly took place in Athens in 1896 where his main idea was peace among nations. 80% of the honorary members of the IOC founding Congress 1894 in Paris were members of national peace movements. Five of those won later Nobel Peace Prices.

“Wars break out because nations misunderstand each other. We shall no have peace until the prejudices which now separate the different racesshall have been outlived. To attain this end, what better means than to bring the youth of all countries periodically together for amicable trials of muscular strength and agility?"

Coubertin was convinced that peace education could only be effective if theoretical learning was accompanied by personal experience. Olympic sport was the very means to achieve this aim. Sport in the sense should become an instrument to reform economy and politics and thus society asa whole: “The Olympic Games will be a potent, if indirect factor in securing universal peace”.
Article 6. of the nine Fundamental Principles of the Olympic Charter “The goal of the Olympic Movement is to contribute to building a peaceful and better world by educating youth through sport practised without discrimination of any kind and in the Olympic spirit, which requires mutual understanding with a spirit of friendship, solidarity and fair play.”

We can witness to-day that the enormous cost of staging the Games, its commercialisation and the intense international rivalry of nationalism have corrupted that original Olympic Games ethos. Modern capitalist sports is organised with a view to realising profit. Profit-making thrives best when people are kept divided. There is no way then that sports as it is organised today can bring peoples of the world together as one. In reality sports entrenches petty, myopic chauvinism. Each country sees the other as an enemy. People competing under national flags only helps in keeping them disunited.
Posted by ajohnstone at 3:56 am