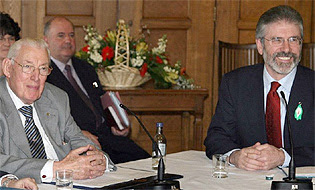 It was a great day at Stormont. The great and the good from many countries were there including the British Prime Minister, Tony Blair, and the Irish Taoiseach, Bertie Ahern. Centre stage, of course, were Ian Paisley, yesterday’s ‘Never-Never’ man, now grinning like death in the apocalypse, and Martin McGuinness, yesterday’s IRA commander, expensively tailored and replete with effusive grin.

The event was generally acknowledged to be the formal end of Northern’s Ireland’s infamous thirty years of internecine warfare in which nearly 4,000 people were killed and some 60/70,000 injured.

Doubtless the fare was rich and the guests ate heartily. Paisley, Adams and their followers especially may have baulked somewhat at the political menu and the public exhibition of having to eat their words - admittedly. generously marinated in personal emoluments well beyond their past dreams of fulfilment. They could all be well satisfied with the price they got for their bloodthirsty ‘principles’.

Among the less great, the voting fodder who were afforded the democratic privilege of watching the circus on television, there was cynicism and utter disbelief but undoubtedly the overwhelming majority of the people of the province looked on the spectacle with differing measures of relief. If this collection of provocateurs and proxy killers was to be endured for peace - or what passes for peace in capitalist society - they would put up with it. The more thoughtful would have scratched comfort from the realisation that its not very different elsewhere.

Paisley’s DUP and the IRA’s Sinn Fein are together in government. Sane people can only hope that the electorate put them there because it was the despicable price that had to be paid for peace - for the game was always about power - even in Mother Erin’s British subsidised Fourth Green Field.

Ironically, Paisley’s antics over the last 40 years has done more to emaciate Unionism’s power base than the IRA; conversely, Sinn Fein is now an integral part of the political structures its murder campaign was supposed to destroy.

It is reasonable to ask what the working class got in return for its suffering for the victims - the killed and the killers, the mentally and physically maimed, the prisoners - were, as always, overwhelmingly of the working class. The media clarions our reward; we are going to get peace we are told. The agencies that were making war have gone into partnership - showing once again that peace and war emanate from the same source.

Meanwhile real power will not reside in Stormont, or London, or Dublin. It will reside in the cheque books of the billionaires and the multinational consortiums whose profit considerations will decide the priorities. Ultimately it is their writ that determines how we live in latter-day capitalism - even, indeed, if we live!
RM
Posted by John at 3:42 pm