Churchill - as he should be remembered 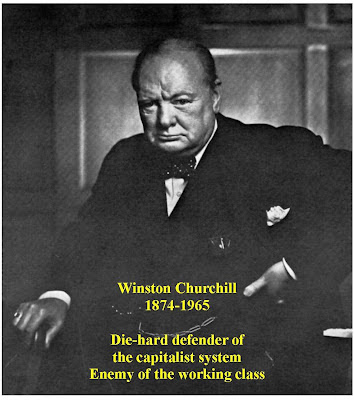 Socialists know that Simon Sebag Montefiore is a lousy historian, something which can be gathered by reading his Stalin: The Court of the Red Tsar (see the Socialist Standard review) and confirmed by another book titled Speeches That Changed The World. Stalin makes an appearance here too, along with Jesus, Mohammed, Lenin, Hitler and other misleaders. Churchill is also a member of this motley crew.

Sixty seven years ago today, shortly after becoming Prime Minister, Churchill was, according to Montefiore, "...finally able to use his remarkable powers of oratory to rally and uplift the whole British nation in its struggle against the Nazi threat." During that speech Churchill stated that he had "...nothing to offer but blood, toil, tears, and sweat." Needless to say, given that every utterance from such MPs (mendacious parasites) needs to be taken with a mountain of salt, and that Churchill lived a life of luxury for over 90 years, he was, of course, referring to the millions of brainwashed workers who during the course of World War II would be die at the altar of King Capital.

That, as Montefiore notes, Churchill was voted ' greatest Briton' in a 2004 survey is only one sad reminder that decades later capitalism persists only through the acquiescence of the working class. Unlike the Socialist Party which has no secrets, Montefiore does not, of course, provide a warts and all (see this also) profile of Churchill, though he is candid enough to note that Winston "...suffered from a slight lisp and a stammer...". Indeed, this is the reason why recordings of "'We shall fight them on the beaches' speech of 4 June 1940 and the 'Their finest hour' speech of 18 June 1940 were made by one Norman Shelley - a radio actor who played Colonel Danby in BBC Radio 4's The Archers and who died in 1980.

Without then the help of Montefiore or the actor Shelley, we will allow Churchill to speak for himself on a variety of topics:

On Bolshevism: For Churchill, the Soviet Union was a 'tyrannic government of these Jew Commisars', a 'worldwide communistic state under Jewish domination', 'the international Soviet of the Russian and Polish Jew', or just 'these Semitic conspirators'.
On race: Churchill said 'the Indians in East Africa are mainly of a very low class of coolies, and the idea that they should be put on an equality with the Europeans is revolting to every white man throughout British Africa'.

In February 1954, he told the cabinet 'the continuing increase in the number of coloured people coming to this country and their presence here would sooner or later come to be resented by large sections of the British people' .
On force-feeding hunger-striking suffragettes: It was 'not a medical question', said Churchill. 'It is a question of policy.'
On Irish independence: According to Churchill, the struggle for Irish independence from Britain was part of 'a worldwide conspiracy against our country' by 'the rascals and rapscallions of the world who are on the move against us'. Organising Orangemen in June 1922, Churchill said: 'When we begin to act we must act like a sledgehammer, so as to cause bewilderment and consternation among the people of southern Ireland .'

On Hitler's coming to power: 'The story of that struggle, cannot be read without admiration for the courage, the perseverance, and the vital force which enabled him to challenge, defy conciliate or overcome, all the authority of resistances which barred his path', said Churchill. Asked about Germany 's anti-Jewish laws in 1938, Churchill thought 'it was a hindrance and an irritation, but probably not an obstacle to a working agreement'.

In 1937, Brigadier Packenham Walsh reported that 'Winston says at heart he is for Franco'.

And from the 'Churchill in perspective' article (Socialist Standard, March 1965):

"..It was he [Churchill] who called out the troops during the Dock Strike in 1911. He was Chancellor of the Exchequer in government which put on the statute book the 1927 Trades Disputes Act, prohibiting strikes by one group of workers in sympathy with another, curtailing the right of picketing, and preventing the Civil Service unions affiliating to the T.U.C....In 1927 he was "charmed,..., by Signor Mussolini's gentle and simple bearing, and by his calm, detached poise in spite of many burdens and dangers."..."I have always said that if Great Britain were defeated in war, I hope we should find a Hitler to lead us back to our rightful place among the nations.".."

By way of conclusion, from the same article:

"Churchill was a member of the British capitalist class and he served his class well. He maintained a constant anti-working class attitude throughout his life....In death, as in life, he served our rulers well. The pomp and ceremony of his funeral was a circus for the diversion of the working class. The entire pulpit - religious, political, press and radio - have been loud in his praise. Here was a man, they said, for workers to look up to, to recognise as a leader, and in doing to pay homage to future leaders and the principle of leadership...Where did Churchill lead the workers? Where will any leaders take them? Workers have only to reflect on their experiences - not for Churchill and his class, but for those they dominate, is it a life of blood, sweat, toil and tears. And it will remain so, until the same workers who are deluded into hysterical hero worship of men like Churchill, learn that their interests lie in dispensing with leaders and setting up a social system in which all men stand equally."
RS
Posted by John at 8:08 pm